MARINES IN IRAQ TO GET TECHNOLOGY TO PREVENT HELICOPTER MISHAPS

Marines in Iraq are expected to receive a dust abatement technology next month that may alleviate the hazards of landing helicopters in the dusty, desert environment, according to the Naval Research Laboratory.

According to the lab, which developed the technology, half of the helicopter mishaps in Iraq and Afghanistan were caused by “brown outs,” or loss of visibility from landing in dusty environments.

NRL announced Nov. 1 that it signed a licensing agreement with the company Soilworks® in September to market the solution under the name Surtac.

The technology — comprised of a polysaccharide blend, surfactants and mordants — is diluted with water and then sprayed topically to interact with dust and sand particles, creating a hardened surface, Barry Spargo, head of NRL’s Chemical Dynamics and Diagnostics branch and the principal investigator for the research, told Inside the Navy.

Twenty totes, enough for about 40 landings, will be sent to the Marine Aviation Weapons and Tactics Squadron One in “the first or middle part of December,” for an extended user evaluation, Spargo said. MAWTS-1 will use the systems in Iraq in support of the I Marine Expeditionary Force, he added.

“That’s one of the things that is so amazing about this product,” Falkenberg told ITN. He added the ingredients are “literally edible,” do not sterilize the ground or kill vegetation and are biodegradable.

“It is so environmentally sound that there is nothing close that can even touch it,” Falkenberg noted.

They think Surtac will “probably” be exempt from an EIS, he added. The technology is “completely green,” “all natural,” “consumable” and “very benign,” Spargo noted.

Falkenberg noted that Surtac is a mixture of “readily available” off-the-shelf ingredients, has a “very high” solid-content of 70 percent and does not require special equipment — making the logistics “much cheaper.” He declined to give a price for the technology, noting that is still being determined.

Currently the NRL is looking at an aerial delivery system that would create landing spaces from the air. The idea is to let a helicopter create a landing space for itself or another helicopter operating in the same area.

Two other dust abatement products have been used in theater as an extended user evaluation — one that is also developed by SoilWorks and another developed by Envirotac, Spargo said. — Aarti Shah 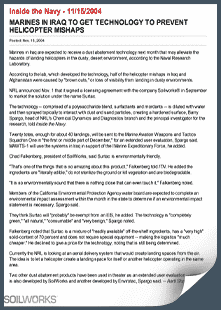