Four technologies are being examined: Soiltac®, EnviroKleen, Surtac and Envirotac II. Dust abatement technologies have been used in theater since January 2004, according to Mike Farley, team lead for material and construction equipment at MARSCORSYSCOM.

“There is no single product that can really do the job,” Farley told Inside the Navy. “For example, all the products do fairly well. It depends on the soil type, it depends on if it’s real fine talcum powder or if it’s just sand . . . each product has a different property of its own that in and of itself provides better solutions than another one does.”

The chemicals are only one part of “the ultimate solution,” he explained. A combination of gravel, matting and the chemicals will ultimately determine the technology’s use, Farley noted. This evaluation process has been under way for more than a year, Farley added. Part of the process is determining which technologies are most suitable for different scenarios, he noted.

A rocky riverbed, fine-grain sand and the talcum-powder sand are examples of different environments. Surtac, for instance, may work well in the talcum powder, but not too well in the rock bed, he said. “So those are the types of things we are still evaluating,” he said.

Receiving feedback from theater, and compiling the information to produce an overarching report that describes the recommended uses and drawbacks of each system is the most challenging aspect of the evaluation process, Farley noted. Any feedback the command receives from the theater could make it easier to instruct Marines on how to use the technology properly, Farley said.

“We have done some of that already and we are doing some tests in the [United States],” Farley said. “But Iraq is kind of unique because we don’t have some of the information, and we don’t have some of the feedback. But we are getting tidbits of information back that are helping us.” So far, all the products are “showing good promise and they will control the dust, it’s just that you can’t single-handedly use . . . one product to cut down on dust. You have to use a combination of things,” he said.

Even though they serve the same function, each product is different. For example, EnviroKleen — developed by Midwest Industrial Supply, Inc. — is a polymer that does not require a mixture with water because it is a liquid. Instead it requires “some flexibility with the soil, so it will move with the soil,” Farley noted.

Soilworks developed Soiltac, which Farley called “a polymer that requires a water mixture and sprayed out using a water spreaders or hydroseeder.” Soiltac is being used on a regular basis in Afghanistan, Farley said.

Also, SoilWorks licensed Surtac after the Naval Research Laboratory invented that product. While the

other technologies use “certain chemicals,” Surtac is made from a sugar and starch mixture and is not waterproof, Farley said. Twenty totes of Surtac were recently delivered to Iraq, Farley noted.

Currently, Soiltac is waterproof but Surtac is not. However, SoilWorks is developing a waterproof version of Surtac that could eventually replace Soiltac as a cheaper but equally effective dust palliative, Chad Falkenberg, president of SoilWorks, told ITN. Falkenberg said he hopes to have a waterproof Surtac completed within 60 days, but it could be sooner.

But a waterproof system would not be used for short-term use in theater — which is how Surtac is currently being employed, according to James Wynne, principal Surtac investigator and research chemist at NRL.

Additionally, plans to make Surtac tactical have been under way at NRL for about six months, according Wynne. A tactical delivery system would make it possible to deliver Surtac in an expeditionary way in a hostile, combat environment, Wynne said. At first NRL planned to use a fire-fighting bucket to deliver the product tactically, but the bucket posed safety hazards when empty so the effort was abandoned, he noted.

Envirotac — developed by Environmental Products &amp; Applications, Inc. — is being used in Iraq and in the United States, and has to be mixed with water and diluted in order to be laid down, Farley noted.

“What we are doing is trying to evaluate all the products that are available to us that are being used commercially and determine what that application methods and what the application processes are so we can continually improve on our methods of applying this stuff down in environment that works best,” Farley explained.

Marine Aviation Weapons and Tactics Squadron One is using dust abatement technologies in Iraq. Envirotac II “is durable enough to withstand multiple landings by both skid and wheeled helicopter, and has proven to be a valuable and easy to use product with great results,” Lt. Beatriz Yarrish, a squadron spokeswoman, told ITN.

She added that in addition to Envirotac II, Soiltac, EnviroKleen, and Surtac “are being used in Iraq and have had a solid positive impact on the way that the military is conducting” forward arming and refueling point operations in combat. — Aarti Shah 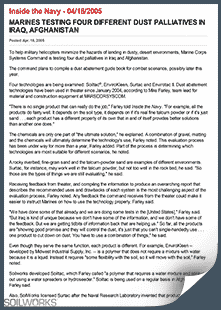