The Army’s expanded modularity push, fueled by billions of dollars added to the service budget by the Pentagon, prompted the Army to take a fresh look at its tactical wheeled vehicle strategy and come up with a more relevant plan, a service official said last week.

The service received a huge funding boost for modularity in a late 2004 Pentagon budget decision, which added $25 billion over fiscal years 2007 through 2011. Additional billions of dollars are expected from FY- 05 and FY-06 emergency supplemental spending bills.

How the Army will spend that money remains undecided. Still, millions for trucks are certain to be among the service’s priorities as it tries to replace and refurbish vehicles returning from Iraq and Afghanistan.

The Pentagon is considering trimming the Navy’s planned fleet of 11 aircraft carriers to 10 in order to find money for new military capabilities needed to better contend with irregular, catastrophic and disruptive challenges, according to Pentagon sources and documents.

A classified study, prepared by the Joint Staff and the Office of the Secretary of Defense in preparation for the Quadrennial Defense Review, has determined that an aircraft carrier strike group that arrives at the tail end of a major combat operation does not significantly affect the outcome of the battle.

Accordingly, the “Force Sufficiency Analysis” — part of the Operational Availability-06 review, a major underpinning of the QDR — recommends one carrier strike group be put on a list of programs that might be cut this summer as the Pentagon looks for money for new capabilities.

Specifically, the analysis “has determined that later-arriving [carrier strike group] forces do not significantly impact the major combat operations war fights and should be considered as ‘decrements’ to major campaign force lists,” according to a Navy summary of the findings provided

to InsideDefense.com. “The OA-06-assessed ‘excess’ surge forces could be considered by the QDR capability mix IPT 1 as potential trade space for the ‘takes’ roundtable discussions.”

An independent review team is evaluating requirements, technologies and risks for the CH-53E replacement helicopter, looking for ways to match up the program’s scope with available money, according to William Balderson, the Navy’s acquisition official in charge of air programs.

The CH-53E replacement program, previously called CH-53X, is now referred to as the Heavy Lift

An independent cost estimate from Naval Air Systems Command on the CH-53E replacement recently produced a higher figure than a separate cost estimate from the heavy-lift program office, Balderson told Inside the Navy April 14, following a House Armed Services subcommittee hearing on helicopters. (He did not cite specific figures.)

In response to the differing estimates, Navy acquisition chief John Young tasked the independent review team to see “whether or not we’re doing certain things that are driving excessive cost,” Balderson said.

“What we’re trying to do is set the requirement in such a way that we have an affordable program so that we can proceed” with a milestone B review and the system development and demonstration phase in fiscal year 2006, he said.

The review team is expected to brief Young on its findings in July, in time for the Navy’s FY-07 budget proposal to the Office of the Secretary of Defense, Balderson said.

The Army is beginning to seek international participation in the development of the Future Combat System.

FCS “looks to me like it’s going to be a multinational development program of some variety,” Michael Wynne, the Defense Department’s acquisition chief, said during an April 14 conference on international defense cooperation and trade.

Already, the service has signed a “land battlespace” memorandum of understanding with the United Kingdom that governs medium and light vehicles. The Army also is looking to forge a similar alliance with Australia, and there are several U.S. technology arrangements with Singapore that could feed into the FCS program, officials say.

Australia has been interested in such an agreement since the beginning of the year, Brig. Gary Bornholt, military attache for Australia, told Inside the Army. But the Army, during an April 7 Security Assistance Command “partnering day,” “leaned forward” farther than it has in the past in expressing interest, he said.

Four technologies are being examined: Soiltac®, EnviroKleen, Surtac and Envirotac II. Dust abatement technologies have been used in theater since January 2004, according to Mike Farley, team lead for material and construction equipment at MARSCORSYSCOM.

“There is no single product that can really do the job,” Farley told Inside the Navy. “For example, all the products do fairly well. It depends on the soil type, it depends on if it’s real fine talcum powder or if it’s just

sand . . . each product has a different property of its own that in and of itself provides better solutions than another one does.”

The chemicals are only one part of “the ultimate solution,” he explained. A combination of gravel, matting and the chemicals will ultimately determine the technology’s use, Farley noted. This evaluation process has been under way for more than a year, Farley added. Part of the process is determining which technologies are most suitable for different scenarios, he noted.

The Defense and State departments have put together a package of legislative proposals for fiscal year 2006 that would clarify authorities for transferring military equipment to friendly nations in the war on terrorism, and expand the Pentagon’s research and development cooperation with NATO allies,

William Haynes, the DOD general counsel, sent the proposals to Capitol Hill April 12, with a request that they be included in authorization bills lawmakers are expected to begin crafting next month.

One measure recommended to Congress would amend the Arms Export Control Act by explicitly stating that the sale of defense articles and services to friendly countries for antiterrorism and border security actions is allowed under the law.

Lawyers at DOD and the State Department have interpreted existing law as authorizing such transfers, but officials at the agencies say “what is implied should be made express,” especially given the need to act quickly in combating terrorists, according to a section-by-section analysis accompanying the proposal.

“It is important that all tools available to combat terrorism be clearly identified,” the analysis states. “Lack of clarity can lead to confusion, undue delay or disapproval of assistance to foreign countries……We want to eliminate the possibility of undue delay.” 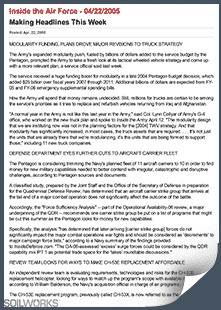