In an effort to minimize the hazards of landing helicopters in dusty environments, Marine Corps Systems Command is continuing to test four different dust palliatives in Iraq.

But feedback about how each product is performing remains inconsistent, according to Mike Farley, team leader for material and construction equipment for the command.

“Feedback is inconsistent due to rotating personnel and how the palliatives are mixed and applied,” Farley told Inside the Navy via e-mail. “EnviroKleen has shown the most promise since it cures fast and requires no mixing. The other palliatives are dependent on correct dilution ratios, cure time and soil type,” Farley added.

Part of the evaluation process is determining which palliatives work best in different scenarios.

A dust abatement guidebook was slated to be released as early as this year, but based on the need for more input Farley said “it looks like next summer” before the book will be ready.

Funding for the dust abatement program is $5 million in the FY-06 budget. Phased procurements are planned for FY-06 through FY-08. The acquisition objectives are 25 hydroseeder trailers mounted, 25 hydroseeder skids mounted and 25 2,500-gallon water distributors, Farley said.

“Iraq is kind of unique because we don’t have some of the information, and we don’t have some of the feedback,” Farley told ITN in April (ITN, April 18, p1). At the time, he said all of the products were showing promise and would control the dust. “It’s just that you can’t single-handedly use . . . one product to cut down on dust. You have to use a combination of things,” he noted. All have worked well, but collective data has not produced one solid solution, he said at the time. — Zachary M. Peterson 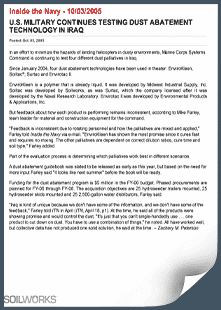