The experiences of operating forces in Iraq and Afghanistan have helped generate a “statement of need” for technology that reduces the dangers of landing helicopters in dusty environments, according to the program’s logistics leader.

Embrey discussed the subject with Inside the Navy via e-mail, through a Marine Corps spokesman.

Testing will be done to see if these products can be carried inside C-17 and C-5 aircraft and transported externally via CH-53 helicopters, she said. User integration and evaluation is scheduled for March in Vicksburg, MS, Embrey added.

EnviroKleen and Soil-Sement were developed by Midwest Industrial Supply, Inc. Soiltac is made by Soilworks and Envirotac II was developed by Environmental Products &amp; Applications, Inc.

“The palliatives utilized by the Marines have provided mixed results . . . some are effective in certain soils and some are least effective in others,” Embrey explained. “The bottom line is that the palliative by itself cannot totally eradicate the dust problem, but when combined with other measures such as matting and gravel, the dust problem can be mitigated significantly.”

“It depends on the the situation you’re in,” said Marine Corps Brig. Gen. Martin Post, assistant deputy commandant for aviation. ITN spoke with Post after a House Armed Services subcommittee hearing on rotorcraft safety Feb. 1. He added that the amount of time military personnel have to prepare for any given landing has an impact as well. Post said it is easier to use these palliatives in a more formalized, forward position where personnel are more prepared for landing, rather than a place “where you are only going to be for two hours.”

A dust abatement guidebook is currently in the final draft, and will be reviewed during the user evaluation, Embrey said. Publication is scheduled for this summer.

Naval Air Systems Command in Lakehurst, NJ, is looking at approving “new material solutions that helicopters are approved to land on,” Embrey said. At press time, a spokesman for NAVAIR had not provided any additional details about what the command is testing. — Zachary M. Peterson 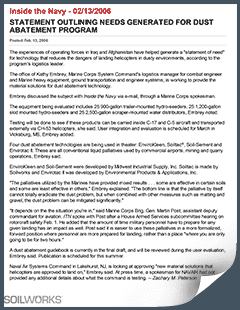