Subject: Sigma Mesa Stabilization Plan for Rubble Generated from the Demolition of TA-16-340

In response to your letter of February 23, 2006 the Los Alamos National Laboratory
(LANL) is submitting the attached stabilization plan that will provide engineering controls to prevent dust dispersion and run off and/or run on occurrences at the rubble pile on Sigma Mesa once implemented. That rubble pile consists of the debris resulting from the demolition of the TA-16-340 facility. It has been the topic of numerous meetings, phone conversations and a request from LANL for a “no longer contained in determination”.
Your letter asked that such a plan be developed and submitted within 15 days of its receipt. Also within the letter was a request for additional information (five separate questions) that did not have a time frame attached to it. LANL focused on the plan and is now submitting it for your consideration and approval. The responses to your five informational questions will be addressed shortly under a separate cover.
You will see that LANL looked at two different alternatives in addressing your concerns over the stabilization of the rubble pile. LANL had a number of constraints to consider in selecting the appropriate path. The location of nesting locations of Mexican Spotted Owls and the noise levels that could be generated in their proximity, the safety of those employees implementing the chosen alternative, fmther dismption and possible dispersal of the rubble material, as well as how quickly and efficiently a methodology could be deployed were some of factors that were of concern and were considered in the final decision.

Once you have reviewed the LANL plan and determined its adequacy, LANL will implement it within the schedule provided in the plan. If you have questions or concerns over this letter or its attachments please contact me at 667-0633.

This plan responds to the letter received from NMED on February 28, 2006 requesting a plan describing engineering controls to minimize storm water contact with the concrete rubble at Sigma Mesa. This waste was generated during demolition of the TA-16-340 complex. NMED requested a description of engineering controls that LANL will use to minimize infiltration of precipitation and generation of fugitive dust, and to control stormwater run-on and runoff by diverting surface water flow away from the rubble.

The concrete rubble is located within the TA-60 Sigma Mesa area on a flat grade west of the Asphalt Batch Plant between Eniwetok Road and Mortandad Canyon. Approximate dimensions of the rubble are 150 x 200 ft. The height of the rubble ranges from less than l ft on the east side to approximately 15 ft at the west terminus. Total square footage of the concrete rubble is approximately 60,000 sq ft.

To control stormwater run-on and runoff by diverting surface water flow away from the rubble, a continuous compacted soil berm 2 ft high and 3 ft wide was installed around its perimeter on September 7, 2005. This berm effectively diverts run-on to and runoff from the rubble. In accordance with the Stormwater Pollution Prevention Plan under which the rubble is managed, the berm is inspected monthly and following each precipitation event of greater than 0.5 in.

LANL evaluated two options to minimize precipitation infiltra:tion and fugitive dust generation from the rubble. Considerations affecting both options include environmental impacts, threatened species protection, personnel safety, efficiency and efficacy of application, and schedule. Environmental impacts include fugitive dust creation, product introduction, and waste generation. Threatened species protection applies in this location due to habitat for Mexican Spotted Owl (MSO). Surveys are conducted annually during the breeding season beginning March 1 and continuing until approximately May 15. The 2005 MSO survey confirmed Mortandad Canyon to be occupied by Mexican spotted owl. Noise restrictions begin in MSO habitat on I March of each year and generally if the habitat survey confirms the presence of the MSO, noise restrictions continue through August 31 (noise restrictions require any noise to be not more than 6 decibels above background levels); however, in the case of the location on Sigma Mesa, LANL conducted an informal consultation with the U.S. Fish and Wildlife Service (USFWS) to determine the practicability of operating a concrete crusher in that location. As a result of this consultation, USFWS concurred that noise-generating equipment use could be approved beginning July 15. Personnel safety applies with respect to the installation and inspection of the engineering controls. Efficiency and efficacy of installation refer to the expediency of installation, and the effectiveness of the control. Schedule describes the timeliness of installation.

Under this option, the rubble and berm would be sprayed with a commercially-available copolymer emulsion sealant/stabilizer/dust control agent that is widely used in commercial, construction, and military applications. The material comes in concentrated form and is mixed with water for a spray-on application. This product physically binds and adheres soil particles and aggregate together. When applied topically it forms a hardened crust, which is effective for both dust control and stabilization. The sealant dries to a clear coat within 24 hours, has a longevity of 12-24 months, and can be reapplied whenever necessary. Once cured, it will not break down or wash away when exposed to precipitation or storm water runoff. Binding loose particles together will significantly minimize fugitive dust generation. Formation of a hardened surface on the rubble and surrounding soil will minimize infiltration of precipitation and facilitate the collection and evaporation of any precipitation falling within the bermed area.

Environmental Impacts: Use of the product will require a Notice oflntent to Discharge. No additional waste would be generated as a result of using this product. The product takes 24 hours to cure. Once cured, the sealant is insoluble and would not be present in precipitation contacting the rubble. Application of the sealant would not affect the waste characterization of the rubble. MSDSs for the material are attached to this plan.

Threatened Species Protection: Application of the sealant would be performed using a water truck or a hydroseeder. It is anticipated that noise generated from both types of equipment would fall under levels permitted under MSO restrictions.

Personnel Scifety: Because no personnel would be in contact with the rubble during sealant application, safety issues would be minimized. The equipment required to apply the sealant would present hazards similar to standard construction or dust suppression activities. While inspection of the engineering control may require personnel access to the rubble, contours would remain visible to inspectors..

Efficiency and Efficacy of Installation: The rubble is fairly well compacted, with a minimum of void spaces. Void spaces between the concrete pieces are relatively small, and no large voids were identified that would potentially prevent penetration of the sealant. The sealant would be applied to ensure penetration into the interstitial spaces, which should facilitate establishment of a hardened crust on and around the pieces of rubble. The product must be applied during a dry period. It could be applied within 1 day, and would cure within 24 hours.

Schedule: Weather permitting, the sealant could be applied within 15 working days from receipt ofconcurrence among LANL, DOE, and NMED.

The rubble would be covered with one or more 12 mil UV resistant (to 3 years) woven coated polyethylene panels. The panel(s) would be placed over the rubble and anchored to the ground in accordance with manufacturer recommendations, at ten-foot intervals. To expedite placement of the panels, minimize the potential for panel damage, and to ensure the best possible fit for minimizing infiltration of precipitation, the rubble would be reconfigured using heavy equipment. The reconfiguration goal would be to level out the particularly high spots in the rubble to achieve a more uniform distribution of the rubble inside the berm.

Environmental Impacts: Reconfiguring the rubble would generate dust Use of panels as the engineering controls option would generate an estimated additional 200 cu yds of waste material once the rubble can be disposed of.

Personnel Safety: The weight of the rolls and contours of the rubble present a eonsiderable personnel safety hazard (crush, suffocation, and slip/trip/fall). To some extent, use of heavy equipment to aid in installing the panels would mitigate those hazards; however, the hazards would remain because personnel would be required to manually guide placement of the panels. Additionally, if hot welding of seams were required but could not be done due to fire danger, then carrying and placing 40-lb. sand bags over panel interfaces would present a lifting/strain hazard to personnel. Inspections would be done without accessing the rubble; however, maintenance, if necessary, would require access. The panel surface would be slippery and the inability of the inspector to see exact contours for foot placement would present a safety hazard.

Efficiency and Efficacy of Installation: Panels are prone to considerable influence from wind. Due to the size of the panel(s) that would be installed under this option, installation would need to be performed in conditions of calm winds. Once MSO restrictions are lifted, reconfiguring the rubble would take 3 to 5 days. Panel installation would take I to 3 days.

Schedule: Work on liner installation, including rubble reconfiguration, could begin after July 15, within 30 working days from receipt of concurrence among LANL, DOE, and NMED.

After considering environmental impacts, threatened species restrictions, personnel safety, efficiency and efficacy of installation, and schedule, LANL has selected the sealant option to minimize infiltration of precipitation and generation of fugitive dust at the Sigma Mesa rubble area. 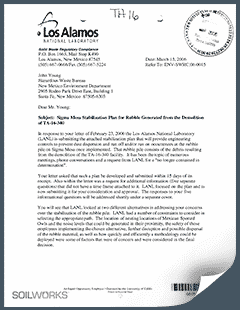