14.PROPERTY PURCHASE IN THE TOWN OF ABRAMS
Motion by Hilbert, second by Winter to forward resolution to county board regarding purchase of Ostrenga property to allow County Forest Road 102 to remain open (1.82 acres) in Town of Abrams.  Vote carried unanimously.

15.UPDATE ON STATUS OF PLAT BOOKS

17.RECREATIONAL OFFICER REPORT-Snowmobile and ATV audits were conducted, very impressed with program.  Per audit standards would like 1 citation for every $500, currently county issues 1 citation for every $300 (ATV) and 1 citation for every $325 (snowmobile).  Oneida County is hiring 2 rec officers next year, funding will be down due to more requests from surrounding counties.  Labor Day weekend was very busy approximately 50 citations were written over weekend.  2 ATV accidents happened over weekend, no life threatening injuries.  Speed limit signs have helped control ATV Traffic.   Dusty Trails ATV Club received a grant from Polaris T.R.A.I.L.S. to apply a Durasoil Dust Control agent, has helped with dust control tremendously, pictures from club were reviewed.   Approximate cost to apply durasoil dust control agent is $1,000 every 100 ft.   Motion by Sleeter, second by Zoeller to approve rec officer’s report and to approve quarterly transfer of funds.  Vote carried unanimously.

20.DISCUSSION ON ORDINANCE 10.805 – PEDDLING &amp; SOLICITING
Discussion was held on businesses soliciting on county property.  Bruce Mommaerts will contact business association with idea of placing kiosk on county property for business members to display.   Mr. Skalitzky will consult with Mr. Mraz and place on next months agenda.

22.INLAND LAKES PROTECTION &amp; REHABILITATION DISTRICT #1 REQUEST TO PLACE BOAT DOCKS ON COUNTY PROPERTY
In October 2005, Committee agreed to allow a dock placed on county property by Burnt Dam Road, but first was to inquire if the Town of Townsend wanted the property.  The town is not interested, committee wants to see if the Inland Lake Protection &amp; Rehabilitation District is interested in property and place on next months agenda.

23.LENA SNOWDRIFTERS BRIDGE “IRON BRIDGE” IN STILES
STS Consultants viewed Iron Bridge in Town of Stiles and recommended “that the bridge be closed for use until the safety of the structure can be determined”.   Mr. Skalitzky has contacted the Lena Snowdrifters Club.   STS Consultants submitted quote of $6,400 to fully inspect bridge, with full report to committee by October 27.   Motion by Zoeller, second by Hilbert to award inspection to STS Consultants for the sum of $6,400 and place award in paper for bridge inspection, funding to come from snowmobile maintenance funds and divided by every club equally.

26.SAFETY ASSESSMENT
Majority of safety issues have been taken care of, will look into building steps to code to access mezzanine storage at shop.

28.DISCUSSION ON LANDS ADJACENT TO COUNTY FOREST AND RECREATIONAL TRAILS
Mr. Skalitzky suggests the county needs to do more to protect their interests (County Forest, Recreational Trail Easements) from encroachments, would prefer Certified Survey Maps, but understands this would increase workload.  Motion by Sleeter, second by Hilbert that the Forest, Parks, &amp; Recreation/Land Information Systems Committee recommend to the Zoning Department that any applications for permits that are adjacent to the County Forest or the State Recreational Trail be forward to Mr. Skalitzky for review.  Vote carried unanimously.

29.ANDERSON LAKE
Quote was received from Dave Wendtland with STS Services for Anderson Lake boat launch.  Motion by Sleeter, second by Winter to forward resolution to county board allowing Mr. Skalitzky to apply for 50% funding from the Wisconsin Waterways and 50% to come from boat land account,  once project is complete county would place fees at launch.  Vote carried unanimously.

32.ANNOUNCEMENTS/GENERAL INFORMATION (NO ACTION TO BE TAKEN)
Last Sunday, September 3 every spot at the Pensaukee Landing was full, and question was asked if Shawano County lowered number of supervisors on county board. 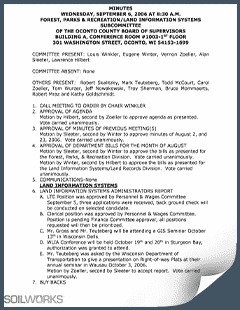