The Marine Corps is equipping its force in Iraq with more hardware to distribute dust palliatives, which help reduce the hazards of landing helicopters in desert environments.

Currently, there are eight of each type of hydroseeder in Iraq. Additional hardware will be fielded to all garrison units there by end of the year, Mike Farley, team leader for material and construction equipment for Marine Corps Systems Command, told Inside the Navy last week.

The water distributors should be fielded by March 2007, Farley said.

One particular palliative does not work better than another, Farley said.

“There’s mixed results,” he noted. “The palliative by itself is not totally the answer.”

Each palliative reacts differently in different soil types and the chemicals are best used in combination with gravel and matting technology, Farley explained.

“What we’re trying to do is combine [mat] technology with a [liquid] membrane type, dust abatement material. You would have a 200-by-200 square foot area you would stabilize with a liquid membrane and then you would come and put your mat membrane in the middle, let’s say 100-by-100,” Mike Jiavaras, the expeditionary airfield team lead at Naval Air Station Lakehurst, NJ, explained to ITN in February (ITN, Feb. 27, p1).

A dust palliative guidebook is set for release within 30 days, Farley said Sept. 20. The approximately 60- page book includes pictures and describes how each palliative should be applied.

“There are so many palliatives out there,” Farley said. “What we’ve done is we’ve focused in on those

that generally do not create any problems for the water [supply] or soil.”

Funding for the dust abatement program is $5 million in the FY-06 budget. Phased procurements are planned for FY-06 through FY-08. — Zachary M. Peterson 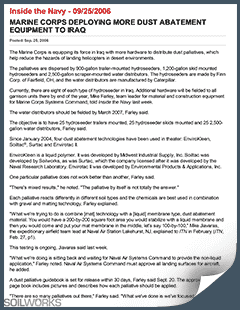