Houston, Texas. The fourth largest city in the United States is home to the Port of Houston, a massive 25-mile long complex of diversified public and private facilities located just a few hours sailing time from the Gulf of Mexico. It is the busiest port in the U.S. in terms of foreign tonnage and it ranks tenth in the world in total tonnage. In 2000, the EPA selected the Port of Houston as the only port to be trained in the creation of sophisticated environmental management systems (EMSs).

The steam ships sail in and out of the Port of Houston. Their cargo of primarily steel (plates, pipes, etc.) is unloaded by crane into large trucks and tractor trailers, which then transport the freight a short distance to the rail facility on site or directly off the site. The Port of Houston Authority (PHA) leases the lots of the port to over 150 private industrial companies, and some lots receive over 200 trucks a day. The truckloads are then fork lifted into railroad cars. One 52,000 lb. forklift making sharp turns while carrying extremely heavy loads can really tear up your soil. Having multiple sky-scraping cranes, thousands of large trucks, and upwards of one-hundred massive forklifts, all bearing super heavy loads on clay-like soil, is a recipe for producing excess amounts of dust, which has a negative effect on particulate air quality.

The PHA hired consulting giant Fugro, a world leader in soils and earth surface analysis, to assess the best way to control the dust problem. Fugros prescription was to apply Soiltac, a synthetic copolymer emulsion treatment manufactured by Soilworks, LLC in Gilbert Arizona. Fugro determined that 6 gallons of water would dilute each gallon of Soiltac concentration, and that this amount would cover an area of 60 square feet. So, using this 6:1 ratio each acre would need 726 gallons of concentration and 5100 gallons of solution. The PHA put the job out for public bid, and the low bidder was AAA Asphalt. The project: two 4000-gallon water trucks apply a voluminous 380,000 gallons of solution to an area of 75 acres in 30 days.

To sum it up, the Port of Houston has been in good standing with the EPA for a long time, during which it has taken an active role in managing its effects on the environment. This project is yet another example of the Port taking aggressive measures to stay in compliance. 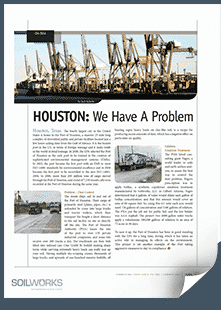