From The Island Manager

The Board has decided to Pull M21 off the market for now. Lots J38, (.35 acre) – minimum bid $40,000; and Tract A in Div K, (.88 acre) – minimum bid $80,000; both have positive soils feasibility study results by Ray Brown, copies are available at the Island Office. Tract A in Div K has an existing, but 1mplatted road on the property. An easement will need to be written into the deed to account for the road.

The Island will accept sealed bids for their sale until Noon on F1iday, August 31st, 2007. (Bids must be received in the Island Office do not rely on the Post office). Sealed bids must include a pre-qualification letter from a bank or lender. h1order to submit a bid, Island owners must be current in all assessments and billings. The Island will not sell another property to someone who is currently in anears. The Island will cooperate with realtors by paying the buyer’s commission of 5%.

Board Vacancies This September there will be four Board Positions to be decided. Susan Dahl, as an appointee, must run again this fall. Our President, Menill Balanag has completed her maximum length of se1vice and is not eligible to run again. Larry Bender and Charlotte Maulsby are both at the end of their first terms.

If you are interested in running for one of these open positions you must let the office know before noon, Friday, August 17th. Interested persons should go to the community  web site and down load a candidates fo1m, fill it out and return it to the island by Noon that Friday. There will then be a “Candidates Forum” following the community meeting on Saturday August 18th. Ballots will be mailed the week following the August community meeting and are due back by 2:00 PM on Saturday September 15th.

Dumpster day was held on June 23rd  in the Marina Parking Lot. As, always  it was a  much anticipated  day and people  were lined up early.   The repo1t below shows the  expenses associated witl1 the day. As you can see each dumpster cost us $600 in Elsie runs, truck time to bring it over and back, a daily rental fee and dump charge at the transfer point. We took in $3006.18 and we spent $7,559.53. So Dumpster day cost the Island $4,552.82.

Cars lined up early for dumpster day, June 23rd. We filled 5 dumpsters with trash and one with scrap metal

The Roads Committee is testing a dust control agent. This repo1t comes from Sharon Meadows of A24. Our test site for Durasoil® ( a vegetable oil based dust binder) has been established! On July 1, 2007 George Hannon and Bill Townsend sprayed Durasoil® in 2 test segments while Ginger Haimon and Sharon Meadows (Townsend) measured and took notes.

The 1st segment begins at the corner of Saratoga Dr. and Snohomish Way and continues up Snohomish Way for 50 feet and road width of 15 feet. In this segment a lighter application than recommended was applied, 50 sq. ft. per gallon.

The 2nd segment continuing on Snohomish Way, also 50 feet and road width of 15 feet, had the recommended application of 25 sq. ft. per gallon expected to last 18 months. Next application would require 1/3 of the original amount that was applied.

On those segments there is no dust! Please drive through and check it out.

The roads Committee has received Board approval to bring over $5,000 worth of Durasoil® to expand the testing pro- gram. If you are interested in participating in the test areas (at your own cost) contact Sharon Townsend via the web page, committees tab.

Are we spending too much?

This is the last in a three month series of pieces on our spending. The first two reports dealt with a lot of numbers and we’ll look at some more this month. But this month deals more with philosophy. Are we spending more in 2006 – 2007 than were in 2002 – 2005? YES! The question is why? As the balances in our Special Assessment Accounts demonstrates we have for years now, been collecting monies and not repairing things, or selecting the cheapest repair possible. In the past we have spent $700 on a used greens mower (They cost $20-$25K new). Sounds like a great buy but when we got it to the island we never used it because it was in such bad shape. The clichés “Penny wise and Pound Foolish” and “Pay me now or Pay me later” both come to mind. The cheapest solution is rarely the best one – especially financially and the repair is always more expensive than the cheap purchase. So over the past year we’ve been fixing a lot of things. Some that were never fixed before and in many cases we’re fixing the fixes.

Here’s a very real measurement of our spending. The spreadsheet below shows where we are on our plan for the year. It’s an Income vs Expense report compared to our planned budget. You’ll see the budget column and an actual column  as well as a numerical and percentage comparison of our performance. While certain sub areas are higher or lower than projected the “Bottom Line” is that we are about 9% better than we had hoped. Actually we’ve caught up on a number  of things and have less spending planned for the fall than we did in the spring (the exception being continued major renovations on our water system for which monies are available, see water report below).

The bottom line is that there was A LOT that needed doing and we’ve done many of them.

Who says sinks don’t fly, Everything including the kitchen sink goes 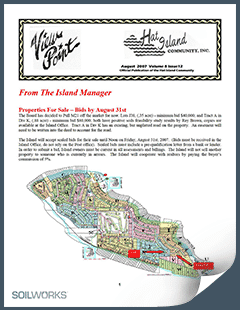