CalCIMA believes that fugitive dust is more a nuisance than a health hazard.  They concede that contribution of fugitive dust to the PM10 ambient levels may be substantial.  They also believe that a balance between combustion pollutant impacts (ozone attainment, air toxics, GHGs) and fugitive dust impacts needs to be struck.

The Draft EIR focuses on the air quality impact of one criteria pollutant, NOx, because it is the only pollutant that has the potential to have a significant impact.  This response includes an analysis of the potential NOx emissions from the bulk material handling facilities having to comply with proposed Rule 55.  The most cost-effective method of controlling unpaved road dust at permanent facilities, such as those at sand and gravel or concrete batch plants, is the once-per-year dust suppressant application rather than daily applications of water.  One such dust suppressant, Durasoil®1 (manufactured by Soilworks® of Scottsdale, Arizona), is able to effectively control dust from an unpaved road for nine to sixteen months on one application.

Durasoil, a synthetic organic fluid, can be sprayed with a typical watering truck, and is effective at controlling dust emissions for at least nine months before any re-application is needed.  It is sprayed at full strength (no dilution with water or anything else) at a rate of 1452 gallons per acre.  A typical facility can be treated in one 10 hour application using a used 1997 watering truck certified to on-road emission specification of 4 grams per brake horsepower hour.  Assuming that 40 bulk handling facilities in the county used this form of dust control, the estimated additional NOx emissions and PM emission reductions are calculated below.  The results from this table indicate that the unpaved road dust control

1 Mention of trade names is to demonstrate product availability, and not considered to be an endorsement by APCD

However, according to Chuck Conner of Soilworks® (Scottsdale, Arizona), his synthetic oil-based suppressant, Durasoil, requires no watering maintenance (oil and water do not mix).  One year after the original application, only 30 percent of the original volume needs to be re-applied. Three applications of this dust suppressant will provide 5 years of fugitive dust control, including particulates as small as 2.5 microns.

CalCIMA is concerned about the health risk from Particulate Matter, and both the PM2.5 and PM10 air quality standards should be addressed.  The PM2.5 standard measures particulate matter that is 2.5 microns and smaller while the PM10 standard measures particles smaller than 10 microns.  CalCIMA asserts that health risk should be analyzed based on health risks based on PM2.5 from crustal sources (dust) and PM2.5 from combustion sources.

APCD staff agrees with CalCIMA that Senate Bill 656 focuses on health effects, and it should be noted that this legislation requires the District to adopt all feasible measures to reduce both PM2.5 and PM10.  APCD staff also agrees that the focus on health risk should be preserved when balancing adverse and beneficial impacts of fugitive dust control under proposed Rule 55.

CalCIMA contends that GHG impacts should be considered in the light of the fact that CO2 emissions will not be reduced by forecasted engine technologies and fleet turnover as described in the Draft EIR to reduce criteria pollutant emissions.

APCD staff disagrees with this contention because future engine technologies will be more efficient and emit fewer carbon dioxide emissions.  One of the main reasons for this efficiency gain is the advent of ultra low sulfur diesel fuel.  This new fuel allow manufacturers to install 3-way catalysts on trucks that will reduce both carbon monoxide and NOx similar to the catalyst on your passenger car.  The use of these oxidation/reduction catalysts will allow truck manufacturers to re-tune their engines for greater efficiency using more fuel-efficient air fuel ratios.  Previously, these engines were tuned for NOx control which often hurt engine performance or mileage.  Therefore, fleet turnover will reduce GHG impacts since more efficient newer vehicles will replace older less efficient models.

According to CalCIMA, APCD has the responsibility to disclose and mitigate significant impacts under CEQA for proposed Rule 55.  CalCIMA further states that although diesel use resulting from proposed Rule 55 may be “infinitesimal” compared to the total diesel use in the county, it will still contribute to an existing adverse cumulative impact on GHG emissions.

According to the Draft EIR and not disputed by CalCIMA, the impact of GHG emissions from the implementation of proposed Rule 55 is less than significant.  Since this impact is less than significant, APCD is not required to implement any mitigation measures.  However, new engine technologies and fleet turnover will lessen these GHG impacts over time as explained earlier. 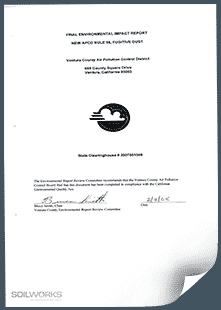