Soiltac®: Bought 20 bags. Will do the track once with 5 bags to maintain for 1 year.

-Bob gets keys @ 5pm on Friday

-Each child gets McDonalds coupon

*Note for next year– we need to make a telephone list.

Lethbridge AGM: Will be held same night as banquet. Doors open at 5, dinner at 6. Awards and AGM

ABA Proxy: Vote. Each member has a vote. AGM is November 8th

-Darren will write this article

Indoor Building Possibilities- Called Dot Stein, said to call back end of October. Will leave this task for new executive.

-Funding. Potentially write a letter to the Casino. In 2006 indoor costs were:

-Possibility of a building. Kris Mann called John about is available by Park Lake (Paintball area) If interested, is heater, will allow us to dig. Room enough for one straight, turn, and another straight. Four man gate only.

-Maybe use as a conditioning facility. 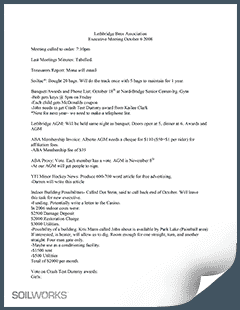