This project was funded by USEPA’s Office of Research &amp; Development through allocation of Regional Applied Research Effort funds. Supplemental funding and staff resources were provided by Clark County DAQEM and Maricopa County AQD. Six different dust suppressants, including four surfactants, one synthetic organic, and one synthetic polymer were evaluated for their impact on water quality, both runoff potential to surface water and leaching potential to ground water. From each County, one bulk sample of about 5 cubic yards and five one-gallon samples were collected. These soil samples were delivered to the San Diego State Soil Erosion Research Laboratory (SERL) for testing.

Soils were selected using soil maps contained in PM-10 plans and rules for the Las Vegas Valley and Phoenix for PM10 non-attainment areas. Staff from Clark County DAQEM and Maricopa County DAQM recommended specific locations from which the soil samples were collected.

Fugitive dust accounts for 80% or more of particulate matter less than 10 microns (PM-10) in desert areas such as the Las Vegas Valley (Clark County, Nevada) and the Phoenix Metropolitan Area (Maricopa County, Arizona). Desert soils that tend to resist water have particularly high propensity for creating fugitive dust. These types of soils are prevalent in Clark County, Maricopa County, and other arid areas. The use of dust suppressants other than water can be beneficial, and in some cases necessary, to adequately control fugitive dust at earthmoving/construction sites. They also reduce the quantity of water needed for adequate dust control, thereby contributing to water conservation. Without the use of dust suppressant products, earthmoving of soils with high potential to create fugitive dust in hot temperatures may require constant watering to comply with fugitive dust regulations.

The study design replicated, to the extent possible, conditions under which dust suppressants are typically applied at construction sites in desert climates. This included use of soils from Arizona and Nevada, a simulated 5-day earthmoving period with soil disturbance and repeated product applications, and heating soils to desert temperatures during the day. Emphasis was placed on dust suppressant applications to control dust during active earthmoving, e.g., rough grading. Surface runoff tests incorporated different combinations of two product application scenarios, three rainfall intensities, and three rainfall time periods (up to 2 months following product application).

Clark County DAQEM and Maricopa County AQD recommended specific locations for soils collection by reviewing soil maps contained in PM-10 plans and rules for their respective areas. The maps classify soils by texture and corresponding severity of dust- emitting potential.  The following soils were collected for use in the study:

Soil for the surface runoff and vertical migration experiments was collected “in bulk” from a single site in Maricopa County and a single site in Clark County.   Approximately 5 cubic yards was removed from each site by backhoes digging to a depth of 1 foot. Soils for the pilot experiment were collected from five sites in Maricopa County and five sites in Clark County. The ten sites are intended to represent a general survey of random soil types and particulate emissions potential. At each of the ten sites, 1-2 quarts of soil to a 1-inch depth were collected.

Once the soils were delivered to SERL, the two bulk soils were re-mixed to ensure homogeneity for segmenting into individual test trays and columns. Each bulk soil was placed on a clean tarp, spread into a square approximately 1 foot deep. The soil was then divided into four equal quadrants using stakes and string lines. Next, 30-gallon plastic garbage cans (previously cleaned with reverse osmosis water) were filled with equal parts of soil from each quadrant. The garbage cans were labeled, covered and transferred inside for storage.

USEPA Region 9, Clark County DAQEM, Maricopa County AQD, and EQM selected 6 dust suppressant products with good potential for minimal impacts on water quality and aquatic life. Table 1 shows the products selected, along with product-to-water ratios and application rates recommended by the manufacturers (for Jet-Dry, the product-to-water ratio and application rate were recommended by a representative of the construction industry).

In order for the study to replicate real-world dust suppressant use, an experimental design was developed to assess the effects of repeated product applications and simulated soil disturbance. A 5-day period was selected as a typical length of time to accomplish rough grading at a construction site. The study design included raking of soil to a 1-inch depth in order to simulate disturbance necessitating product re-application.

All soils in the test trays were heated during the day to mimic desert conditions. This was done with appropriately spaced heat lamps to increase the temperature of the soils to approximately 86-104 degrees Fahrenheit for 12 hours each day.  Soils were heated during both the 5-day dust suppressant application period and throughout the aging periods (up to 2 months).

The surface runoff tests were performed on a 3-meter wide by 10-meter long tilting test bed with overhead rainfall simulators. The test bed was outfitted with eight platforms designed to hold removable soil trays (i.e., “test plots”) 14 inches wide, 25 inches long, and 4 inches deep. The soil trays were suspended in the center of the platforms and, during the experiment, tilted to a 33% slope.   Rainwater was applied to the soil trays using a Norton Ladder Rainfall Simulator, developed at the USDA-ARS National Soil Erosion Research Laboratory. Nozzles are spaced 1.1 meters apart and at least 2.5 meters above the soil surface.

The rainwater used in the experiment was tap water treated with reverse osmosis, henceforth referred to as “RO-water”. RO-water was used for three purposes: 1) as artificial rainwater to generate surface runoff from soil test plots; 2) as a dust control alternative applied to soil test plots to represent “untreated” control scenarios; and 3) to dilute products where specified in the dust suppressant application scenarios.

The purpose of including rainfall event scenarios one or two months following product application was to capture any biodegradation effects that may occur over time.  Given the combination of the various test parameters, a total of 126 soil trays were prepared — 18 for each of the six dust suppressants plus 18 untreated (RO-water alone applied).

Surface runoff from each soil tray was directed into a plastic flume discharging into a 4 liter, wide-mouth sample bottle. Thus, a water runoff sample was generated for each of the 126 trays.

The vertical leaching tests were conducting using 4-inch diameter vertical flow columns. The vertical leaching tests were conducted using the same 5-day application scenarios as in the surface runoff tests (including dust suppressant re-application, soil raking, and soil heating), except dust suppressants were applied in lower quantity due to the smaller container size. Another difference was that RO-water was applied to the top of each soil column and held at constant head. This simulates a circumstance in which rainwater has collected into a puddle or pond and gradually infiltrates.

A total of 80 soil columns were prepared — 12 for each of the six dust suppressant products plus 8 untreated columns (RO-water alone applied).  Effluent from the bottom of each soil column was collected in 4-liter, wide-mouth sample bottles.

For the pilot tests, 1-2 quarts of soil collected from five locations in Arizona and from five locations in Nevada were placed into 4-inch diameter by 2-inch depth cylinders. The intent of these tests was to evaluate sensitivity of select water quality parameters to differences in soil chemistry to gauge the potential of dust suppressant products to mobilize salts and/or metals that may pre-exist in soils.

Dust suppressants were applied to each of the soil cylinders. Following this one-time application, the cylinders were stored for 24 hours. Next, 300 ml of RO-water was applied to each cylinder and the entire soil-water mixture was transferred to a 1-liter sample bottle. The soil-water mixture was then analyzed for pH, Electrical Conductivity, and Total Dissolved Solids.

All six dust suppressant products plus water-only control tests were evaluated on all 10 soil samples. The pilot experiment generated a total of 140 results for each of the 3 water quality parameters tested.

A trend was observed for Total Suspended Solids (TSS) values in surface runoff from soils treated with Durasoil and EnviroKleen. TSS reflects the quantity of sediments suspended in water and resulting water clarity. TSS concentrations corresponding to these two products were significantly higher relative to control samples (on average, five times higher in Durasoil runoff and twice as high in EnviroKleen runoff). The higher TSS values appear to relate to the products’ soil binding characteristics and the tendency for larger dirt clumps to form and be released in surface runoff relative to tests involving untreated or surfactant-treated soils. In a real-world setting, overland runoff typically travels some distance, creating opportunity for heavier dirt clumps to settle out prior to reaching a water body. Also, use of an on-site retention pond as a stormwater best management practice would likely prevent off-site runoff.

In pilot tests on multiple soil types that examined the water quality of a soil/water/product mixture (as opposed to surface runoff), Total Dissolved Solids (TDS) concentrations for two products — Enviro RoadMoisture 2.5 and Durasoil — were significantly higher than control samples. TDS refers to inorganic solids dissolved in water, such as mineral salts. In contrast to these results, TDS values observed in surface runoff tests involving Enviro RoadMoisture 2.5 and Durasoil were not higher relative to control samples.   The high TDS pilot test results may be a facet of experimental design rather than an effect that would occur in surface runoff. Additional research could assess the actual potential of the two products to mobilize salts in surface runoff from multiple soil types.

Toxic effects to the invertebrate Daphnia magna were observed in some samples, however, most runoff samples from the surfactants showed no significant impact. For the limited instances when an adverse effect on daphnia survival was observed in surfactant runoff relative to control test runoff, variability among control test results renders the effect inconclusive.

Runoff from Durasoil and EnviroKleen showed a significant impact to Daphnia magna survival rates across all tests. This effect was not a classic toxic response but related to physical entrapment of the daphnia in an insoluble product layer. However, the entrapment observed within small laboratory test containers does not represent an effect likely to occur in an open water body, given various potentially mitigating factors. Furthermore, any such effect would likely be localized to a small area. Pure product tests with Durasoil and EnviroKleen showed that the physical entrapment effect does not extend to a smaller invertebrate also commonly used in toxicity testing, Ceriodaphnia dubia.

The results of this study should in no way be construed to support the use of substitute dust suppressant products that have not undergone similar testing and may have other and/or more significant potential impacts to water quality or aquatic life than the limited effects observed in this study. 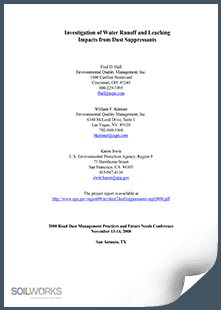