Chair Taniguchi called the meeting of the Mauna Kea Management Board (MKMB) to order at 10:05 a.m.

Upon motion by Herring Kalua and seconded by Ron Terry the minutes of the January 9, 2009 meeting of the MKMB were unanimously approved.

Joel Kelley is the new ranger who replaced Kimo Pihana who retired last summer. Mr Kelley’s first day was January 31. He has extensive background as an emergency medial technician and fireman and will be instrumental in developing an emergency response program for the rangers.

UH is again requesting legislative authority to promulgate administrative rules. While it is believed that the University has the authority under its autonomy to promulgate rules, UH is requesting express authority. This bill also asks to establish a system for assessing fines and fees. Tomorrow the Senate version will be heard in a joint hearing with the Higher Education and the Water, Land, Agriculture, and Hawaiian Affairs Committees. Interim Director Nagata attended a hearing on HB 1174 in the Higher Education Committee. Decision making was deferred until today because there were questions regarding some of the language in the bill. If it passes it moves on to the next committee.

The draft Mauna Kea Comprehensive Management Plan (CMP) is available at the maunakeacmp.com. Public comments are being accepted. An informational briefing before the Board of Land and Natural Resources is scheduled for February 13.

The draft Environmental Assessment was filed with the Office of Environmental Quality on January 28 and the 30-day public comment period begins on February 9th.

Christian Veillet stated the subcommittee of four telescope directors will be meeting at the end of the month to look at issues regarding the transfer. They are anxiously awaiting the hire of a new director for the Office to begin talks to move forward on the transfer. A directors’ meeting is scheduled for early March during which they will have another opportunity to discuss the transfer. Not all of the directors agree with the transfer, but they have decided to look at the situation as positively as possible.

A.      Mauna Kea Observatories Support Services (MKSS) Request to Use Durasoil on the Summit Roads

The Office received a request from MKSS to apply Durasoil for dust mitigation on the road from SMA up to Keck and over to the NASA Infrared Telescope Facility, the Submillimeter Array, and possibly around the Canada- France-Hawaii Telescope and Gemini areas. Durasoil has been applied on the access road above Hale Pohaku and the summit. It has been extremely affective in controlling the dust.

The Office is still studying this proposal particularly in view of the CMP. MKSS is not in a rush to move on this. Mr. Koehler stated this is not a specific request from any observatory, but MKSS is looking into this in the event of possible future requests.

Interim Director Nagata added Dr. Greg Brenner, who has done several years of surveys of the wekiu bug, reviewed the product and believes it will have little or no impact on the wekiu bug.

Chair Taniguchi noted for the record that the request has been received.

Cory Harden stated that the rule making authority and management plan is the responsibility of the Department of Land and Natural Resources (DLNR) and not the University of Hawaii because DLNR has the expertise and interest in protecting the natural and cultural resources.

The next meeting of the Mauna Kea Management Board is scheduled for Friday, March 20, 2009.

Chair Taniguchi asked for a motion to move into executive session to 1) approve the minutes of the last executive session held on September 16, 2008; and 2) discuss with the Board’s attorney regarding questions and issues pertaining to the Board’s powers, duties, privileges, immunities, and liabilities.

It was moved by Herring Kalua and seconded by Ron Terry to enter into executive session. The public portion of the meeting ended at 10:10 a.m.

Upon returning from executive session and there being no further business, Chair Taniguchi adjourned the meeting at 11:20 a.m. 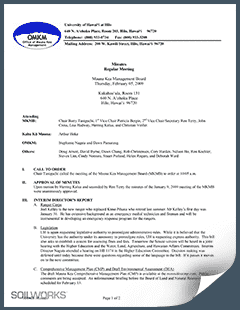