A public work/discussion meeting was held at 5:30 p.m. for budget review.

DECLARATION OF CONFLICT OF INTEREST: The council reported no conflict of interest.

Councilmember Poff asked about 911 hang-ups and cell phones. Detective West said most of these are from land line phones.

Detective West said there have been recent problems with vehicle burglaries. Those individuals were apprehended and prosecuted. He reminded the council that individuals need to contact the sheriff’s department and file a report if there are items stolen.

Councilmember Thomas asked about having dedicated deputies. Matt said he attended a meeting at the county. The Federal stimulus money pays for one dedicated officer in your community for three years, and come year four the city can pickup the contract. Matt explained that we receive more than what we contract with the county. He said the county reported that in reality you might start to see things go down to what cities have contracted for.

The Council thanked Detective West for his attendance.

FIRE DEPT – Tom Graydon, Fire Chief: Fire Chief Graydon approached the City Council and presented the quarterly report. There were 50 runs for the quarter with an 8 minute average response time, 33 minutes average time spent on a call, and 164 man hours on calls alone. There is an average of 6 firefighters per response. Total manpower includes 16 firefighters.

The council thanked Fire Chief Graydon for his attendance.

REPORT BY STAKER PARSONS GRAVEL PIT: Dak Maxfield, of Staker Parsons, approached the City Council. He stated they currently have an interested entity looking at the northwest corner of intersection. This may require a reconfiguration of the two commercial parcels currently located on the north side of the road. Their requirements are 1.5 acres directly on the corner with access off of both the frontage road and main road.

Mr. Maxfield discussed mine phasing. He stated they are currently mining in phase 2 while continued mining of floor sand occurs in phase 1. He said they anticipate moving into phase 3 within one year while continuing to move floor sand in phase 1. He stated floor sand extraction is moving at a much slower pace than anticipated (with only 4 acres of phase 1 currently mined out while anticipating having 20 acres mined out at this stage). Current depth of the pit to the lowest point of the pit floor is 160’ (Mine plan allows for a depth of 180’).

Mr. Maxfield reviewed the dust control plan and explained that treatment of roadways with magnesium sulfide has been completed. Use of a substance knows as Gorilla-Snot has been used to treat the stockpile slopes. The water truck is circulating daily to moisten roadways and other areas which may be prone to drying out. Water cannons are being used in active mining areas. Voluntary air quality monitoring continues to occur.

Councilmember Poll said he isn’t sure the cannons have been used, in fact, one cannon isn’t even hooked up. Randy Anderson said he can check into that.

Mr. Maxfield stated new barricades/wind fences have been installed and strategically placed to disrupt the direction of wind flow as well as knock down sand particles. He reported that 20 large caliper trees with a more adequate watering system have been added to the berm.

Mr. Maxfield reported that the parking lot has been covered with weed killer.

2010 FISCAL YEAR BUDGET: Matt stated the council has been working on the budget and given the state of the economy the city staff has spent a lot of time reviewing the budget. He said it is 4% less than the 2009 budget. He said this budget does not include any increase of merit or cost of living for employees.

Mayor Petersen asked for public comment. There was none. 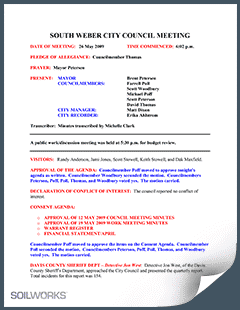