Abstract: Wind tunnel experiments were conducted to evaluate the effectiveness of two commercially available fixatives in controlling the mobility of soil particles on soil mounds when exposed to wind forces. The fixatives tested included two commercially available materials: (1) RoadMaster which consists of 38% calcium chloride solution and (2) Durasoil which consists of a solution of alkanes and alkylated saturated compounds. Soil samples were placed in an open-loop low-speed wind tunnel and exposed to wind forces ranging  from 10 to 30 mi per hour (mi/h). The amount of soil loss/displaced and particulate matter (PM10) generated were monitored in relation   to soil moisture content and application rate of selected fixatives. The results showed that increase in soil moisture and amount of fixative used had a significant effect in controlling the particulate matter ( PM10) concentrations and the amount of soil displaced by the wind forces. The calcium chloride solution was applied by spraying onto the soil samples. However, Durasoil mixture was applied by pouring the fixative using pipettes due to its high viscosity.

Mobilization of contaminated soil and dust particles due to wind forces during excavation, removal, and disposal of contaminated soils is a concern during site remediation activities. Airborne emissions and escape of contaminated particulates have been re- ported during remediation activities (U.S. DOE 2005). Sackschewsky (1993) reported that large amounts of radioactive and hazardous waste at U.S. DOE facilities have been either stored or disposed of within soil medium. This includes solid-waste burial grounds, cribs for the disposal of liquid effluents, and unintentional release of contaminants to soil media. Even waste material in underground storage tanks can be considered to be in the soil medium. During activities that require extensive earth moving, such as the retrieval of buried solid waste and debris or excavation and treatment of contaminated soil, may generate dust and wind-borne contaminant spread. The phenomena of soil erosion and dust generation have been studied by many researchers. The effect of wind forces on mobility of soil particles can be in different forms depending on the size of the particles and wind velocity. Experimental studies of soil mobility using wind tunnel have been conducted by Cornelis et al. (2004), McKenna- Neuman and Nickling (1989), and Hagen (2004) among others, but there are very few studies conducted on the behavior and movement of contaminated soils due to wind forces. Sackschewsky (1993) conducted wind tunnel experiments using contaminated soil to compare the ability of natural polysaccharides to suppress contaminated soil.

The purpose of this study was to evaluate the effectiveness of moisture addition and use of commercially available fixatives in controlling the mobility of soil particles on soil mounds when exposed to wind forces. Soil samples were mixed with plutonium powder simulant, cerium oxide powder, which has similar characteristics as of plutonium and is a nonradioactive material. Wind tunnel experiments were conducted to evaluate the effectiveness of two commercially available fixatives in controlling soil erosion. The fixatives tested include calcium chloride solution [RoadMaster (Tetra Technologies, Inc., The Woodlands, Tex.)], and a mixture of alkanes and alkylated saturated compounds solution [Durasoil (Soilworks, LLC, Chandler, Ariz.)]. An open-loop low-speed wind tunnel was used to test the effect of sustained wind speeds ranging from 10 to 30 mi per hour (mi/h) on mobility and displacement of soil and PM10 particulates.

The moisture content of the soil was determined by modifying the ASTM Standard D2216 (ASTM 2005) and was found to be 2.7 ± 0.1%. Approximately 2 g of soil samples were weighted and placed in an oven at 205 ° C for a period of 4–6 min. This was considered as the “baseline” (dry Hanford soil) case.

PM10 concentrations were measured during the wind tunnel tests, downstream of the air flow, 1 in. from the soil mound in the wind tunnel’s test section. A real-time dust monitor (TSI 8520 Dust Track, TSI Inc., Shoreview, Minn.) was used to record the PM10 concentrations. The PM10 measurements were recorded for an average of 10 min during each test run.

The experiments were conducted in an open-loop low-speed wind tunnel (Engineering Lab Design, Model #304, Lake City, Minn.). The wind tunnel had a 1 ft X 1 ft X 2 ft test section with overall dimensions of 19.2 ft X 6.3 ft X 6.3 ft. The wind tunnel allowed for the samples to be exposed to sustained wind speeds ranging from 10 to 30 mi/h. The wind tunnel’s test section was modified to allow for placement of soil samples in a tray (3 in. X 3 in. X 1 in.). The test section of the wind tunnel had a cross-sectional area of 1 ft X 1 ft and was equipped with a pitot tube for dynamic pressure measurements. Velocity measurements were recorded in the section corresponding to the middle of the soil samples at five vertical distances from the surface of the sample (0.25, 3, 6, 8, and 10 in.). A Phantom V5.1 high speed camera (Vision Research, Stuart, Fla.) was installed in the test section for real-time flow visualization and observation of soil movement (creeping and saltation). An aerosol analyzer instrument (TSI 8520 Dust Track) was placed in the test section immediately downstream from thesoil tray to measure the airborne soil particles. Furthermore, downstream from the wind tunnel’s test section, a collection box was designed and installed to allow for the collection and measurement of amount of soil displaced by the wind forces. The tests were conducted by exposing the soil mounds (with and without fixatives) to wind speeds ranging from 10 to 30 mi/h.

The experiments were designed to study the effects of varying environmental conditions on the fixative performance and the movement of soil particles. Two distinct soil matrices were de- signed and used for the wind tunnel experiments:

For the test runs with Durasoil due to the high viscosity of the mixture, the application of the solution was difficult. The Durasoil solution covered approximately 80% of the surface of the soil sample, leaving 20% of the surface of the soil uncovered. Based on the results, Durasoil was effective in controlling soil erosion when in the wind velocity range of 10–30 mi/h. Soil displacement observations were also conducted for the Durasoil applications. The Durasoil results echo with the results of calcium chloride solution; however, the maximum amount of soil displaced at the higher velocities is restricted to only 2 g.

Wind tunnel experiments conducted with soil samples collected from Hanford Reservation in Washington state showed that soil mobility can be controlled by moisture and use of fixatives effectively. For the natural soil samples collected from the Hanford site with 2.7% moisture content, there was a 99.7% increase in the amount of soil displaced as the wind velocity increased from 15 to 25 mi/h. Soil moisture content played a significant role on soil mobility when exposed to varying wind speeds. There was no detectable soil loss when the moisture content of the soil was at 20% w/w and above at wind velocities less than 25 mi/h. 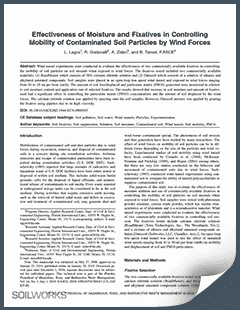