It looks like Amtrak parking lot owners Gabe Silverman and Alan Cadgene have finally begun taking steps to pave the pot-holed dirt and gravel Amtrak station parking lot they own, which some West Main business owners say has become a health hazard to customers because of the dust.

Silverman has been publicly promising to pave the Amtrak parking lot at least since 2004, when he proclaimed it “was going to happen.” In January this year, Neighborhood development chief Jim Tolbert told the Hook that Silverman and Cadgene had told him they were going to pave the lot “as soon as the weather is appropriate.”

West Mainers have called the dusty Amtrak parking lot a “blight” on the neighborhood.

Eight months later, some West Main business owners have decided that it’s been bad behavior, not bad weather, that’s left the parking lot unpaved. For instance,     Maya restaurant owner and Midtown Association member Peter Castiglione called the lot a “blight” on the neighborhood. Indeed, as an early morning photograph     taken by the Hook shows, the dust from the lot can nearly block out the view of West Main. Along with several other business owners, Castiglione finally decided to talk about a lawsuit against Cadgene and Silverman to get them to finally do something about their dust. Not to mention the sizable potholes that have plagued the lot.

Apparently, Castiglione got the duo’s attention. He says that Cadgene suddenly promised to treat the parking lot with a product called Durasoil, a synthetic-organic fluid that controls road dust. Preparation for the Durasoil began on the morning of Tuesday, November 2.

“They have been very responsive since our lawyer got involved,” says Castiglione. “I have little faith that this treatment will be a long term solution. We will watch and wait.”

Meanwhile, Castiglione says he’s been taking video of the lot every day on his way to work, and if the treatment should begin to wear off he’s prepared to follow through with a lawsuit. While a reporter was unable to reach Silverman or Cadgene for comment, Castiglione says he was told that they would treat the lot on a consistent basis to stop the dust problem until it is paved or otherwise developed.

“The sad part,” says Castiglione, “is that the only way we could get them to do anything was to threaten a lawsuit and go back to the media.”

Dish recently asked city officials if the lot violated the blighted property ordinance, which includes “deleterious land use,” i.e. one that is “detrimental to the safety, health, or welfare of the community.”

“If I don’t cut my grass, the city sends me a letter with a picture forcing me to do so or be fined,” says Castiglione. ” It’s hard to wrap my head around the fact that the parking lot situation is not treated in the same way.”

“This would have to be a legal research project that Council or the acting city manager has not requested of   the City Attorney’s office and would not be able to be completed without that initiation,” says city spokesperson Ric Barrick. ” That being said, to date we have done all that we know that we can to convince the owners of  that property to pave over that lot.”

On Tuesday, November 2, a bulldozer was busy grading the Amtrak parking lot in preparation for the Durasoil treatment. 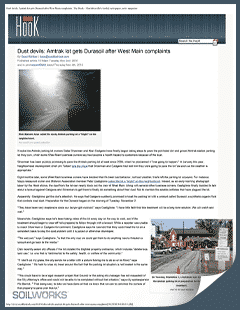