Please join us for a

To celebrate this special time of year

unmanned aircraft systems, and we have worked directly with the FAA in an effort to ensure these regulations will not have a detrimental impact on the aeromodeling community. The FAA intends to present the proposed rule for public comment in a Notice of Proposed Rulemaking (NMPR) in June 2011, and it has become increasingly apparent that the proposed rule will be highly restrictive and will have a significant impact on the modeling commu- nity as a whole. It’s time for all of us to understand these proposed changes, familiarize ourselves with the regulatory process, and to prepare an appropri- ate response to the proposed regulations. Paste the link below for background.

The meeting was formally opened for business at 7.00 p.m. at the Central Point Senior Center by President, Danny Stanton. There were twenty-seven members present.

The Secretary read the minutes of the October 26th Board meeting. There was a question about what time the Xmas Party would be. The answer was provided as 7 p.m. Then a motion was moved, seconded and approved to accept the minutes as read.

There were no comments, so a motion was moved, seconded and approved to accept the Treasurers report as read.

Danny reminded the meeting that the Xmas Party is at King Bo restaurant in Medford on December 4th. De- tails are posted on the web site.

Richard Schwegerl announced that the VR/CS event has been scheduled for September 3rd and 4th for 2011. Any model that was designed prior to 1974 qualifies for this event, even if it was built yesterday.

for the charitable donation of $200 that the club made last month. We are in very good stead with the Center and they expressed the hope that we will continue to meet there.

Phil Baehne talked about his Son who survived drowning two years ago. The boy has had a miraculous recov- ery. At the time, the club helped Phil with some financial support and Phil expressed his gratitude for that help. Now he would like to support the club in return and handed a donation of $300.00 to the Treasurer.

There was a round of applause for Phil.

There was another discussion on the state of the runway and the cracks. Bill Grove described the history of what has been done and what is possible and the costs involved. When the weather is suitable the plan is to fill the cracks with a mixture of “Soiltac®” mixed with D.G.

There was a discussion on the member dues and whether or not “pro-rating” is in effect. In practice new mem- ber dues have been pro-rated even though this is not a documented policy. Presently the dues are listed as part of the Byelaws. Several opinions were expressed. The general sentiment was that the membership dues policy should be clearly defined including the pro-rating amounts and lapses in membership that require a new mem- bership fee etc. Further, that these details should not be part of the Byelaws but an addendum thereto. The Byelaws need to be amended to implement this policy.

A motion was moved seconded and approved for the new Board to address this topic and propose the amendments to the membership to update the byelaws.

One member suggested that the dues be raised to $55-00. No action was taken, as this will be considered by the new board of Officers.

Danny opened up the discussion and solicited nominations for new club officers to take the positions in January 2011.

Joe DeAscentis stated that if there were no other volunteer for the position, he would accept the nomination for Presi- dent. The nomination was made and a vote taken. The vast majority voted in favor and there were no votes against, therefore Joe was duly elected President.

A nomination was made to elect Jim Fowler as the Vice President. The vote was taken. The vast majority voted in favor and there were no votes against, therefore Jim was duly elected Vice President.

A nomination was made to elect Ruth Beck as the Treas- urer. The vote was taken. The vast majority voted in favor and there were no votes against, therefore Ruth was duly elected Treasurer.

There were no candidates to fill the position of Secretary. This position remains open in the hope that someone will step forward. Alan Littlewood agreed to act as Secretary pro-tem in the meantime.

The meeting voted in favor of Alan acting as Secretary pro tem.

Danny stated that he would like to find someone to take a position as entertainment director to organize interesting events, speakers etc to make the meetings more of a fun forum.

Phil Baehne showed the remains of his Me262 which un- fortunately crashed. He is building a new one. He also showed a modified SPAD which he scratch built.

Sam Arrigo showed an 85” Skymaster that be built but has not yet flown.

Jay Strickland showed some special purpose plywood blocks that is used in transformers, but have much value for modeling.

Club leadership is one of the more important fac- ets of our AMA clubs. If we have dynamic and pro- active leadership, the club tends to prosper. If a club officer is an officer in name only, the club will not do as well. Stagnation and declining member- ship are symptoms of clubs having uninspired leadership.

There are multitudes of activities that clubs may undertake that are only limited by the time avail- able from the club officers. Let’s try to recruit club officers that have new ideas and want to give them a try.

All too often it is a problem filling even the most important officer positions in a club. Try to think of some ways to make volunteerism more appealing to club members. Maybe you can have an Officer Recognition Day at one of your club meetings.

Make it a point to invite all officers, past and pre- sent, to the meeting to be recognized. Invite the spouses and bring a cake to celebrate. Some clubs incentivize members to become club officers by giving them discounts on the club membership!

Patches and/or pins are a possibility as well. Get their names out in front of the membership with an article in the club newsletter.

Remember, nothing happens unless you go out and make it happen. Bring up this idea at your next officers’ meeting and get their opinion. You might be surprised at the new ideas that pop up!

Dynamic soaring has been around for millions of years and is now just being recognized by aerodynamicists and aviation circles. Raptors and Sea birds us this technique to soar for long distances or to achieve great speeds with lit- tle energy expended.

R.C. Glider pilots take advantage of this phenomenon, to reach unbelievable speeds, while flying banked circles in the area behind suitably shaped slopes.

While flying this tilted circular path on the back of the slope, the glider crosses the boundary layer (separation layer in the figure) into the lift for a portion of this path.

With each circle flown, the ground speed of the model increases proportionally to the wind speed coming over the hill.

The current R/C speed record for DS is 446 MPH, that’s right, 446 MPH! See the link below for a great explanation

Wings Across America at RERCC!

Here are some pictures from the WAA-08 plane (Wings Across America 2008). We were number 245, it was great to see all the signa- tures and stickers from all who flew it! Almost 3 years ago this program started and it’s just now reaching Oregon. The model will travel from Oregon to Washington, to Idaho, to Mon- tana and should be done flying in every state within the United States. VERY COOL!!

General membership meetings are held on the second Tuesday of each month at 7:00 p.m. Visitors and guests are always welcome. At the meetings, we discuss club business, report on current model-related events, have a show-and-tell session, and sometime have special programs. For show-and-tell, mem- bers most often bring a newly finished model, but partially-built models, engines, or any modeling acces- sory that you think will be of interest to others may be shown. Our special programs may be things like the demonstration of a building technique, a video, or a guest speaker. If you have or would like to give a presentation, bring it up with a club officer so that it can be scheduled.

Board of Directors meetings are held on the fourth Tuesday of each month, also at 7:00 p.m. Members are always welcome to attend.

Our Thanks and Appreciation to the following businesses: 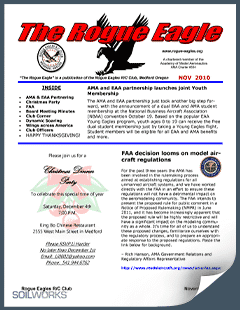