In March 2010, Rural Dust Survey forms were distributed to 250 rural Alaskan communities. Eighty-two (33%) of the surveys were completed and returned to us. The returned surveys represented eighty-two different communities.

This was an informal survey.  In most cases, the surveys we received back were the answers of single people answering as best they could for their communities.  Some survey forms were not completely filled out and some questions had multiple answers, so the number of answers to each question does not usually add to 82, or 100%.  Some answers can’t easily be summarized by counting and averaging, so are not summarized here.   Some answers provide specific information about individual community needs and concerns.  In this report, the survey results are discussed together as a group, rather than identifying specific respondents and their communities.

How is the dust affecting people in rural communities?

When are the dusty days?

What are current conditions in rural Alaska?

Most respondents to the survey reported that their communities have gravel roads.  Many respondents also reported dirt roads.   Most reported roads with shallow grades. The tables below show the kinds of roads found in the respondents’ communities.

Most respondents report that their communities have a mix of vehicles using their roads.   Most common are ATVs and Pickups.  On average, 56% of the vehicles using community roads were ATVs. ATVs are far more common than other vehicle types reported. Pickup trucks were less than half as common as ATVs.

Survey respondents mentioned airstrips, nearby gravel pits, pumice in soil, and honeybucket dumps and waste lagoons as important sources of dust in their communities.

What is now being done for dust control in the communities responding to the survey?

What equipment and materials do rural communities now have for applying dust suppressants?

(Results represent the communities that responded to the survey.)

Dust control in the future

Before trying chemicals what do respondents want to know?

Before trying chemicals what do respondents want to know?(continued)

What resources are needed for dust control?

What equipment do respondents say that their communities would require for dust control?

(Results represent the communities that responded to the survey.)

What storage do respondents say is available for dust control equipment?

What names or types of dust control would respondents  like to try? 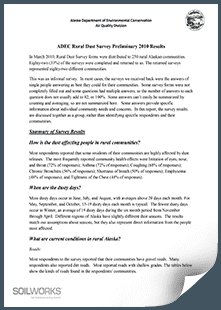