After much consideration we resolved on a sand fibre surface with a dust suppressant.

Due to delivery timing issues we had to put down the sand, then spread the fibre on  top. To  mix  the sand and the fibre we  used a  rotary hoe. The one we  selected was a  self propelled unit from a  local   hire shop and we spent nearly a day mixing the sand and the  fibre. Finally we  added the  Durasoil on top, which we applied with a watering can; ideally we would have sprayed it on the  surface, unfortunately the Durasoil was too viscous for our spray unit.

Our key concerns when designing our surface:

‘Low’ maintenance – there is no such thing as a maintenance free arena, and time spent maintaining the arena is time spent away from the horse. However, there are some activities that we don’t mind as much as others. In our case, we are prepared to put more time into levelling the arena.

Footing – we wanted a shock absorbing footing, that was not too deep, solid enough and not slippery for cavaleti and show jumping

Water – as we only have the water we collect from the roof of the arena available, we wanted a surface that did not require significant watering (also watering arenas can be very time consuming)

So far  the  surface has  met  our  design requirements. Dust has  been controlled and  my  stead Bollinger (a 20 year old warmblood) is feeling distinctly spry on it. Bollinger is a horse who is very protective of himself and he has really enjoyed giving free and suspenseful movement on the surface. As  we  were unable to mix the surface before putting it down, we have found that it has improved with use. As the  fibres break apart more and spread more evenly through the sand the ride has  improved. The  Durasoil has also improved the result as its stickiness has caused the  fibre and  the  sand to  bind together at  a much finer level.

The surface is rather shallow and does require regular rolling to ensure that base remains completely covered. It is also more difficult to construct a shallow surface  (50mm  over  20m  requires  high accuracy – even with laser levelling – when putting the materials down) when compared to a deeper surface.

Putting the sand out was a  major part of  the surface preparation as  the sand was delivered directly   from the quarry (where it was  made  and  washed). Each  load  was  directed to  a  specific point  within the arena and the truck pulled forward to spread the sand out as  evenly as  possible. After all  the  sand was delivered the surface was laser levelled with a dingo. By  carefully  spreading  the  sand  with  the truck a lot of time can be saved in the levelling operation.

To ensure that we spread the fibre evenly over the surface we weighed out the fibre in blue Ikea bags using a fishing scale and the strewed them over marked out meter square areas on the arena.

Similarly, we measured the amount of dust control liquid out into watering cans and then spread it over marked out meter square areas.

Because we were working with a relatively thin surface on  a  fairly unforgiving base we  applied a  lot  more manual effort than if the base had been made of  a  levelled  coarse  sand  as  suggested  in  the Soiltex literature. In particular, the hand controlled rotary hoe required considerably more effort than  one mounted on a tractor.

The sand fibre mix is rolled regularly (typically after every second working session) to help level the surface and maintain compaction.

The surface has been down for  6  months (March 2010) and  has  not  needed watering. Prior to  adding the Durasoil the arena needed 20 minutes of watering with a fire hose before each ride and additional watering during summer to  maintain a  reasonable working consistency and  dust  level.  Since  adding the dust suppressant the surface has improved as  the  Durasoil acts also as  a  binder holding the  fibre and sand together.

After having the surface down over 2.5 years (February 2012) we have put down the second batch of Durasoil at the 2/3 top up rate. 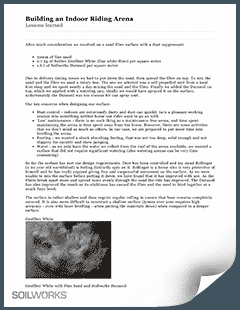