Roll Call was followed by the Pledge of Allegiance. Public Comments: None

Corporal Nester presented the Sheriff’s Report. There were 165 hours for the month of May, averaging 41 hours per week. Total calls for the month were 112. Corporal Nester reviewed some of the calls related to Zorbaz. There was a complaint about the outdoor music still going after 10:00 p.m. on Saturday June 2nd. There was a DWI case where the person involved stated that they had come to Spicer specifically because of Zorbaz’s 2:00 a.m. closing time. Robin deCathelineau motioned to accept the Sheriff’s report as presented, Shelly Munyon seconded the motion.

Outdoor permit request from O’Neil’s was reviewed. Michelle Olson presented 3 dates that they would like to have bands outside on the patio. Troy Block asked if these were the same performance times as last year. Michelle stated that they were. Troy Block motioned to approve the outdoor permit request for the dates and times stated, Shelly Munyon seconded the motion.  Aye: Troy Block and Shelly Munyon.  Nay: Robin deCathelineau.

MNWARN Resolution was discussed, Mayor Baker asked Administrator Valiant to explain the agreement. The purpose of the agreement is to provide mutual aid assistance for water, wastewater and storm water utility services in the event of an emergency to other communities throughout the state. Troy Block motioned to approve Resolution No. 120605-02 Authorizing Governmental Unit to Be a Party to Minnesota Water Agency Response Network (MnWarn),  seconded by Robin deCathelineau.  Motion passed unanimously.

Monte Eastvold from Northland Securities addressed the Council regarding the street improvement bond. The interest rate came in at about 1/10 of a percent less than estimated. Mayor Baker inquired about the results of the credit rating review. Monte stated that it was an A rating which was the same as the last rating the City had received. Troy Block made a motion to approve 1,055,000 GO Improvement Bond Resolution 120605-01, Shelly Munyon seconded.  Motion passed unanimously.

City Engineer Randy Sabart updated the Council on the 2012 Street Improvement project. Grading started a week ago. 1st progress meeting was Tuesday afternoon. There was excessive thickness of top soil found on one of the building sites and this may result in an additional charge. Due to existing lot elevations on the south side of the development one lot will have to be changed from a rambler style to a split level or a patio style. Troy Block asked if before and after pictures had been taken, Leslie Valiant stated that Dan Haats had taken pictures. The contractor is planning to bring in utility crews beginning June 11th. Mayor Baker stated that there is interest in the property already, one lot has been spoken for. Because of the time frame for the annexation, the crews may need to move to Kevin Drive instead of continuing on 6th Street. Administrator Valiant stated that we are sending the ordinance to the Municipal Boundaries for review prior to the hearing. The City Council is having the Public Hearing on July 5th and the Municipal Boundaries will review the ordinance at their meeting on July 13th.  Randy also noted that a newsletter would be going out to the residents to explain the project and the project contacts.

Mayor Baker discussed the installation of sewer line for the Marlys Larson property. Engineer Sabart stated that putting the line in now rather than tearing up the road later was a much better plan and a good investment. Mayor Baker had spoken with Jerry Reierson and he felt that it was a good idea. The City would not require the Larson property to be hooked up now, but would put the same requirements on the property as are put on the 6th Avenue properties. Troy Block motioned to install the sewer line on Kevin Drive per the option quoted in the contract, seconded by Shelly Munyon.  Motion passed unanimously.

Troy Block asked how often we pay for Green Lake Township to chloride the roads. Administrator Valiant stated that we pay them for each application.  A motion was made by Troy Block to approve the payment of checks #19878

Administrator Valiant said the water and sewer rates need to be reviewed. The Council agreed to set up a workshop to review the rates on June 12th  at 4:30.

Administrator Valiant stated that the Poles Gone Wild Project has started. The deck project has also started. The community picnic is on June 22nd  at 5:00.

Maintenance Supervisor Dan Haats addressed the Council with his need for chemical to spray for mosquitoes. He has 4 gallons left which is enough to spray one time. He usually sprays 3 times. It is $650.00 for 4 gallons. Shelly Munyon motioned to approve the purchase of mosquito spray, Troy Block seconded. Motion passed unanimously.

The next regular Council meeting is scheduled for Tuesday, June 19th  at 5:30. 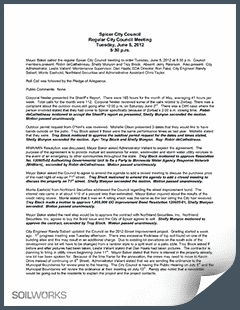