YUMA, Ariz. — Breaking new ground isn?t easy. Building a
foundation, in the most literal sense, is hard work.
Just ask the engineer company of Marine Wing Support
Squadron 374, based out of Twentynine Palms, Calif., who are
refurbishing the landing zone assault strip at the Bull Assault

Forward Arming and Refueling Point site located in the
Chocolate Mountain Aerial Gunnery Range in California, Aug.
9.
“The majority of the work of bringing it out here was done by
motor transportation. Utilities set up all the water points,”
said Sgt. Juan Flores, the MWSS-374 project manager and a
native of Houston, Texas. “And, obviously, the heavy
equipment engineers worked on the ground here.”
MWSS-374 electronically surveyed, gauged, and measured the
site to determine the terrain conditions. Then, construction
began on Aug. 1.
?The most difficult part was keeping with the terrain, making
sure the landing strip is within regulations,” said Gunnery Sgt.
Ramiro Chavez Jr., the MWSS-374 engineer equipment chief
and a native of Naples, Fla.
After layering up to six inches of Recycled Asphalt Product
(RAP) and using Portland cement to provide greater strength
and better durability, it will then be compacted and paved to a
smooth finish. Soiltac, a biodegradable and environmentally
safe product that will reduce dust and prevent erosion, will
also be used to deliver a safer strip to land on for pilots during
training exercises.
“The local Marines will be able to use this LZ as a good
training environment for future FARP operations,? said Chavez.
For Flores, LZ Bull marks his first operation as project
manager.

“This is a learning experience for me as well. I’ve been
mentored by my gunnery sergeant and my officer-in-charge,”
said Flores. “I have some other corporals who have done this
before, so I’m feeding off of them and their ideas, their
suggestions.”
The utilities platoon with MWSS-374 is also experiencing a
first with a new water recycling system. The lightweight water
purification system uses 3,000-gallon collapsible tanks that
pump and filter out clean water allowing Marines to better
conserve resources.
?I don?t believe it?s been done in the Marine Corps,? said Sgt.
Wol G. Deng, MWSS-374 water support technician who enlisted
out of Fargo, ND, but is originally from South Sudan, Africa. ?
It?s been going very well. We test the water every time we
purify it. And it?s been passing, meeting standards.?
The project also protects the Corps? monetary interests.
?Not having to repair this air strip semi-annually will definitely
save the Marine Corps money,? said 2nd Lt. Colin Hunter
Cunningham, the MWSS-374 utilities officer-in-charge and a
native of New Jersey.
The usual cracks, wears and tears would normally have
Marines come out every year. With these improvements, LZ
Bull will need less maintenance less often.
“A message to my Marines: thank you for your hard work,” said
Flores.
Construction is expected to be completed by Aug. 15. 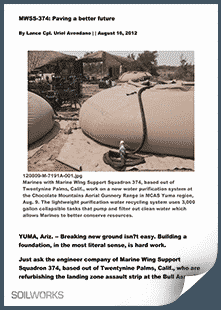