Historically, transportation routes have been designed primarily for the movement of goods, services, and people through and among communities. However, the design of these facilities has given little consideration for the conservation of threatened and endangered species. The approach typically is to achieve transportation goals while mitigating impacts at the least possible cost. This strategy is simply not appropriate when considering an east-west transportation corridor north of St. George. Instead, context-sensitive solutions that give full consideration to resource values and meet both transportation and ecological needs should be implemented. Successful context- sensitive solutions would fully address site-specific conflicts with demonstrable site- specific resolution early and throughout the entire project planning process.

Transportation officials recognize that if a new roadway crossing the Reserve and Red Cliffs NCA is to be considered, the project must contribute to the conservation, protection, and enhancement of the tortoise. Reserve managers currently face numerous challenges for effective management of natural resources due to various constraints (e.g., limited budget). Many identified threats for the tortoise on the Reserve are directly related to current transportation infrastructure and land access issues. With appropriate context-sensitive solutions that consider the needs of the tortoise and the management objectives of the Reserve, a new road through the Reserve could be considered as a management tool to address many of the existing threats. To address these threats comprehensively, transportation issues associated with the Reserve must be reevaluated. This includes identifying opportunities to mitigate existing threats, developing potential roadway design alternatives that would enhance long-term management of the Reserve’s tortoise populations and habitat, and determining appropriate transportation approaches that meet long-term transportation needs.

Involving input by agencies (e.g., USFWS, UDWR, BLM) from the beginning stages of potential solution identification through implementation is critical for success.

Although this study does not provide a site-specific analysis for an exact roadway corridor, it does identify that there are various opportunities for roadway design and the application of engineering techniques that could be used not only to minimize the impacts of a new roadway corridor but also to address many of the existing management issues associated with the Reserve. The 2011 tortoise recovery plan calls for coordinated effort of science-based implementation, tracking, and evaluation of conservation actions. The lack of certainty regarding the success of various conservation strategies and techniques can be incorporated into decision-making processes and research-design opportunities to increase confidence in management actions.

The following are examples of possible context-sensitive solutions to address specific threats on the Reserve that can be considered in transportation planning associated with the Reserve.

Any roadway through the Reserve would need measures in place to avoid or minimize the potential for tortoises to be killed. Barriers, such as tortoise fencing, placed along the edge of the right-of-way would be most effective for keeping tortoises off of the road and out of harm’s way. Signs along the roadway warning motorists about the potential for tortoise presence on the road would elevate awareness by the general public. An elevated roadway over important habitat areas would prevent direct impacts of tortoises being hit by vehicles, in addition to allowing the habitat to remain intact below the bridge.

Collection of tortoises for pets is another source of direct mortality. Providing information to the public so that people are aware of this issue is vital to reducing this threat. An increased presence on the Reserve by law enforcement officials could further reduce this threat.

Threats associated with construction activities are mostly short-term (aside from the direct loss of habitat), and there are a number of industry standard best management practices that can be employed to minimize the potential impacts.

Studies could be implemented ahead of construction schedules to obtain results prior to construction to inform key decisions. Such studies would support the direction of the recovery plan by setting up long-term effectiveness monitoring of management actions and mitigation techniques.

Disturbance could be minimized by reducing the construction footprint (e.g., off-site material stockpiling and staging as well as use of the road corridor itself for access to the site instead of creating separate access roads).

The issue of habitat fragmentation in a small reserve needs to be addressed. There are a number of existing features that currently fragment the Reserve, including the natural topography and existing fenced roads. Cottonwood Road effectively divides the core of the Reserve in half and provides no crossing opportunities. Consideration should be given to one or more of the following:

A road would need to be designed to allow passage of the tortoise. After an alignment is identified, monitoring over a period of years could help decision makers understand tortoise behavior in the area so the road could allow passage in appropriate locations.

This could involve everything from installation of culverts to elevating or depressing segments of the road to allow unimpeded access. The crossings would need to be designed with appropriate lighting (natural, where possible, to avoid outages that could occur with artificial lighting) so that tortoises would not be discouraged from entering the structures. Long bridges can be constructed in areas of especially important habitat to provide uninhibited opportunities for tortoises to cross.

By considering these issues early, there is time to undertake studies and possibly experiments (e.g., building temporary structures to simulate a road) so that appropriate wildlife crossings can be designed and implemented.

To reduce habitat loss due to a new transportation facility, the road may be designed with minimum shoulder width requirements and median barrier, which would restrict the construction footprint. Additionally use of walls can minimize cut and fill requirements. A new facility may be designed to avoid or minimize loss of key tortoise habitat, and engineering options may include bridging and tunneling to preserve key habitat features.

Currently on the Reserve, there are old abandoned roadways that are not designated trails for recreational use. Because there is a lack of signage on the Reserve to inform recreationists that these old roadbeds should not be used by hikers and off-road vehicles, these old roads are continual used. Restoration of these abandoned roadways to a more natural condition could replace acres of habitat lost to a new transportation facility. In addition, Cottonwood Road could be eliminated and restored if a new road north of the tortoise habitat is constructed to access private land. Where restoration activities occur, forage plant availability could be enhanced to improve the quality of the habitat for tortoises.

Compensatory mitigation could also be used for lost habitat whereby additional land could be purchased and protected. There are existing tortoise populations on BLM lands outside the Reserve in the Upper Virgin River RU. Habitat could be improved and maintained in these areas to allow for the survival of tortoises in the Upper Virgin River RU. These satellite populations could become very important if there is a marked population decline as a result of a large fire or disease. The satellite populations could help to ensure survival of the Upper Virgin River RU. Currently, more than 5,000 acres of occupied tortoise habitat is located on federal land outside of the Reserve that is presently not being managed for tortoise. It is likely even more habitat could be identified with additional study. Managing these lands could enhance their ability to support tortoise populations.

Because of the small size of the Reserve, intensive management is necessary to maintain a viable tortoise population. Bringing in water to guzzlers/impressions for tortoises to drink from during drought years can help reduce losses.

A Head Start Program (tortoise hatchery) could also be implemented on an experimental basis, where juvenile tortoises are raised in sheltered environments to protect them from predators. Young tortoises are the most susceptible to predation, so limiting this threat increases the number of juveniles that can be recruited into the population as adults, which thereby bolsters the population.

Additionally, consideration could be given to establishing a satellite reserve to minimize the potential for localized extinction or catastrophic population decline due to disease or wildfire. A satellite population could be established and managed on federal land outside of the Reserve to support a larger tortoise population.

Management actions, such as reseeding with native species, could be implemented to improve these burned areas.

7.6   ELIMINATING THE SPREAD OF NON-NATIVE PLANTS

Ground-disturbing activities would implement best management practices to minimize spread of non-native plants. These practices include reseeding disturbed land with native species upon completion of ground-disturbing activities, washing equipment prior to entering the construction site, and removing mud and debris from vehicles before leaving the site. Utilizing weed barriers and herbicides are potential methods to reduce the spread of exotic and invasive species. Simply minimizing the project footprint to the extent possible could also reduce the potential acreage for the introduction of exotic and invasive species. More experimental approaches could also be used, including targeted grazing by goats and the use of bio-control agents (e.g., black fingers of death).

7.7   REDUCING THE RISK OF WILDFIRES

Restoration of burned lands by planting seeds of native plant species that are not as flammable could reduce the risk of additional wildfires. Weed barriers and herbicides can be used to prevent the spread of cheat grass and other invasive species that increase fuel loads, thereby reducing the risk of large-scale wildfires on the Reserve. A comprehensive fire management plan could be prepared that incorporates the transportation facility as both a fire break and point of access for fire fighters.

7.8   DECREASING THE LIKELIHOOD OF PREDATION

Predation by ravens, while not currently much of a threat on the Reserve, could play more of a role if regular maintenance of litter and road debris is not performed. Trash management, such as litter clean-up and regular street-sweeping, could help control predator subsidies. Another method to reduce predation could include increasing signage to heighten awareness regarding the effects to tortoise associated with litter and off-leash dogs. Avoiding structures that could be used as perches by potential tortoise predators (e.g., overhead lighting, fences) and using alternative types of structures that are not as attractive to predators could also reduce the threat of predation.

7.9  COUNTERACTING THE SPREAD OF DISEASE

A satellite reserve of one or more tortoise populations could minimize the potential for localized extinction or catastrophic population decline due to disease. Additional occupied tortoise habitat is known to be present on federal land outside of the Reserve that could be managed to support a larger population. Additionally, information could be made readily available to inform the public about the harm that could be caused by releasing captive tortoises into the wild population, due to the potential spread of deadly disease.

A new transportation facility could be designed to allow limited and controlled access to the Reserve for authorized recreational activities. Pull-offs would only be constructed at designated trailheads, thereby encouraging recreation on trails designated for such use. On the other hand, prohibited activities would be discouraged by the lack of access in unauthorized areas. By eliminating Cottonwood Road, access to various unimproved roads by off-road recreational vehicles users could be more effectively controlled.

Increased surveillance by the general traffic as well as official police officers could dissuade unauthorized uses because the fear of getting caught would be greater.

Informational kiosks could be placed at designated roadway pullouts that inform visitors of the importance of the area, that dogs must remain on leashes, and tortoises are not to be collected or released.

A summary of the management issues associated with roadways and the Reserve, along with corresponding conceptual context-sensitive solutions, is provided in Table 4. 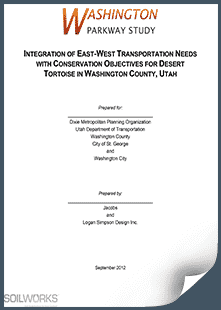