(1)   Encourage owners to stop calling and lodging complaints to DOH – send them to HPP office;

(3)   Encourage lot owners to water the road fronting their home;

(4)   Place correct material on roads and grade correctly with a crown; and

(1)    Create a grassroots signage campaign – that is owner- generated to post speed limit signs on your own lot;

(3)    Send complimentary and encouraging letters and awards to businesses with high trip generation to lower their speed on the roadways.

(1) Place large white- painted boulders in roadway (with appropriate signage) forcing cars to slow down. Cost for 500 boulders is less than $4,000.

(This compares to the approximately $300,000/per mile to asphalt it – also by Yamada)

Use Asphalt Emulsion (a 2-part process) as an aggregate binder on unpaved roads. Cost per mile is approximately $3500/mile.

(1)    Once the road fronting complainers’ home is done, inform DOH in writing;

(2)    Inform DOH that Fugitive Dust Committee has been formed to seek reasonable options to the problem; and,

(3)    Place signage at the top of four main roads in the Park “Drive 15MPH On All Dirt Roads Throughout HPP.”

(1)    Seek legislative assistance to amend or exempt HPP from the fugitive dust law.

(2)    Suggested individuals should chip seal or harden the road fronting their own home – at their expense.

Create a road remediation plan/outline to submit to DOH that is in depth, well- researched, and backed with scientific data. Incorporate this plan into HPPOA Master Plan, make it a part of the HPP road maintenance practice, and submit to Puna Community Plan.

Take legislative action to amend HAR 11 – Chapter 60, (7) (b), Air Pollution Control – to account for areas zoned agricultural (such as HPP, which is AG1), and who demonstrates “the best practical operation or treatment is being implemented,” – because we have a Dust Remediation Plan in place.

Post a sign at top of main roads that reads: “DUST STATUS” – road crew would alter between “Red” or “Green” conditions as the weather varies.

–         Inform residents of new practice in “The Conch” and several community meetings, etc. Consider incentive measures to make it fun and increase participation.

Develop a Road Surface Test Plot Grid to demonstrate our efforts in mitigation of dust.

Use Gorilla Snot which is a soil stabilizer that is an eco- safe, biodegradable liquid copolymer used to stabilize and solidify any soil or aggregate and acts as a dust suppressant, which is sprayed onto the road. The cost per mile is: $9,269 – or $815,672 for the 88 remaining unpaved road miles.

(2)    We need speed enforcement from police.

(3)    Determine traffic generated from businesses located in the Park – do they have special use permits? Should they be required to pay impact fee for roads?

(2) Enforce speed limits by hiring off- duty police; plus create a program for owners to call into a hot line at the office;

(4) Have Road Crew only fill potholes and limit grading over full length of roadways; and

(5) HPP should consider using an environmental attorney – such as Ms. Lisa Woods Munger – rather than a general practice attorney to challenge this violation.

The majority of the members of the Fugitive

(1)     Immediately change the quality of the base course being used and possibly its vendor source;

(2)     Lower the speed limit on unpaved roads to 10MPH – and increase the signage stating so;

(3)     Consider alternative to asphalt paving (currently at $290K/mile to $300K/mile) to a more reasonably priced material and methodology.

The next step is up to YOU.

What would you suggest we do to avoid being fined up to $25,000 per day for this fugitive dust violation? Without a plan, or reasonable efforts in place to mitigate the dust from coming off our roadways, we stand to pay a lot of money for not changing our current practice.

Which solution do you think best meets our immediate and long-term needs?

Should a separate advisory committee be empaneled to select the option and direction we take?

Should the Board of Directors be the sole decision makers to turn this problem around?

Do YOUagree, to be a part

of the solution and not part of the problem?

If so, take action now, to help make this change a reality.

Change Can Happen in HPP 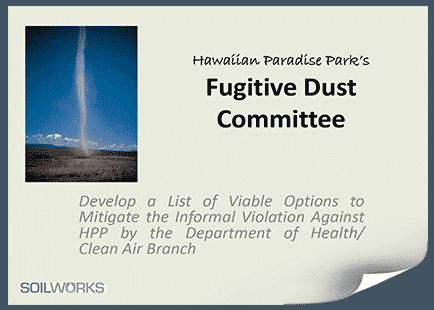