About the Kawerak Transportation

The Tribal Transportation Program is a FHWA funded national program that seeks to address transportation needs of tribes by providing funds for planning, designing, construction and maintenance activities.

Our principal goal is to assist our communities in building a safe and healthy surface transportation infrastructure. Secondary goals include providing employment and training, and advocacy for the transportation, erosion, and flooding concerns of Region.

2008 Planning Award from the Transportation Research Board

Communities that have had projects:

Please note that project years may change as Kawerak seeks to maximize their partnerships and funding on projects with the State of Alaska Department of Transportation and Public Facililities (ADOT-PF), the Denali Commission, the Federal Highways Administration (FHWA) Village Safe Water (VSF) and ANTHC. We also face funding constraints and need to be flexible.

To be considered as a project for KTP:

Below is a list of Kawerak Transportaion Program staff if you may have any questions. 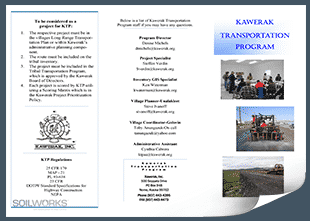