SUBJECT:
Poet Laureate Appointment
BACKGROUND:
At a City Council meeting in May, the selection of a new poet laureate was discussed.
Council directed the Parks, Beaches and Recreation Commission to handle the selection
process.
A poet laureate is a poet who acts as an ambassador and advocate for poetry, literature
and the arts. They are usually expected to contribute to the agency’s poetry and literary
legacy by composing and reading poems at (civic) events and occasions.
At the July 24, 2013 regular Commission meeting, Commissioners Urie, Tabor and
Abbott volunteered and were appointed to serve on a subcommittee for the purpose of
establishing a selection process for choosing Pacifica’s next poet laureate.
The subcommittee met to discuss creating a process for selecting a poet laureate. At
that time, San Mateo County was in the process of selecting a poet laureate and the
subcommittee used the County’s application as a guideline to create one for Pacifica.
At the August 28, 2013 PB&amp;R Commission meeting, the subcommittee brought forth
recommendations to the Commission regarding the make-up of the selection committee,
the application and the timing of the selection process. The Commission voted to
approve the subcommittee’s poet laureate application selection process and directed
staff to move forward.
Eligibility Requirements for the Poet Laureate
• The Poet Laureate will be available to serve a 3-year term.
• The Poet Laureate will be a Pacifica resident who has been recognized for poetry
and literary contributions.
• The Poet Laureate will have demonstrated a commitment to and passion for
poetry and embrace the opportunity to engage in community service to make
poetry more accessible and available.
• The Poet Laureate must have a willingness to serve as an ambassador for
Pacifica and to engage the citizens of Pacifica in poetry at public events such as
readings, workshops, visiting schools, etc.

The Poet Laureate will open the Pacifica City Council meetings with a poem once
each year.
DISCUSSSION
Poet laureate applications were made available to the public from September 23 through
October 23, 2013. Three applications were received. A few weeks before interviews
were scheduled; one of the candidates withdrew their name from consideration, leaving
two.
These two candidates were interviewed by the selection committee on December 2,
2013. The committee came to an agreement on a candidate and made that
recommendation to the PB&amp;R poet laureate subcommittee. The subcommittee has
selected Dorsetta Hale as their nominee for the position of poet laureate for Pacifica.
Dorsetta has lived in Pacifica for over 20 years. She has had her essays and poetry
published in the San Jose Mercury News, San Mateo County Times and the San
Francisco Chronicle. She is also a columnist for the Pacifica Tribune. She has authored
a book of essays as well as a chapbook for which she was awarded a grant from the
Philanthropic Ventures Foundation. Dorsetta is a Barnes &amp; Noble poetry award winner,
Southern California Genealogy Society Essay Writing Contest Winner and was named
“Humor Writer of the Month by University of Drayton, Erma Bombeck Writers Workshop.
Dorsetta has held a position on the Airport Noise Abatement Committee in Pacifica,
volunteered at Pacific Manor, Sharp Park, Pacific Heights, Oceana and Terra Nova
schools while her children attended. She is also currently a volunteer with CORA
(Community Overcoming Relationship Abuse).
COMMISSION ACTION REQUESTED
Appoint Dorsetta Hale as Pacifica’s Poet Laureate

SUBJECT:
Sanchez Dog Park Update
BACKGROUND/DISCUSSION
Since the dog park has opened, the PR&amp;R Commission has held several meetings and
study sessions to discuss various topics and issues relating to the park.
At the April 17, 2013 meeting, Commissioners recommended that, in addition to being
closed on Tuesday, that the park also be closed on Sundays. It was also recommended
that the closure be revisited at six months. Sunday closures began on May 12th.
The Commission revisited the park hours at the October 30, 2013 meeting and voted to
continue the hours which included the Sunday closure.
The current dog park hours are:
Mon, Wed, Thurs, Fri 10 AM to 8 PM or until sunset, whichever comes first
Sat 10 AM to 5 PM
Closed on Sunday and Tuesday
The commission also requested a study session to further discuss issues that have
come up as well as the status of mitigation measures.
A study session regarding the dog park was held on November 20, 2013. In attendance
along with the Commissioners were PB&amp;R Director Perez and Public Works Field
Service Manager Ray Biagini, dog park neighbors Stephanie Poloni and Jeff Tiedje and
Sanchez Tenants from Stephen Johnson Photography, Stephen Johnson and Fiona
McDonnell.
Several topics were discussed including:
Signage at the Property – At the study session several issues relating to signage at the
park were brought up. Some folks felt that there needed to be signs put up in order to
keep cars from speeding, such as 5MPH, or “slow down,” etc. There was also
discussion about the “curb and leash your dog” signs. It was brought up that this was
not clear enough to get the message across that dogs must be leashed in the non-dog
park areas of the property, such as the sports field. Commissioners were encouraged to
take a visit to the site to see the signage for themselves and discuss at this meeting.
Gate/entrance relocation – It is thought that if the two entrances (large dog and small
dogs) were separated and that neither was adjacent to the other side of the park, that
this could possibility eliminate some of the dog barking. Dogs will rush the entrance
when they see other dogs and bark at them.

Field Services Manger Biagini brought a proposal from Northern California Fence Co. to
move the large dog entrance, making it twice as large, to the north. The bid was for
$2,200. After discussion, it was thought that moving both entrances would be more
effective and that it was not necessary to make the entrance any larger than the existing
one. Staff has contacted the vendor to get a follow up bid on two entrances, both the
size of the existing one. While staff has not received it, it is estimated that it would cost
between $2,500 and $3,000.
Fence Covering – Covering the fencing with material has been considered another way
to help to decrease instances of dogs barking as other dogs approach the park as well
as dogs barking at each other between the two park sections. Slats have been
considered to cover the middle section and the west side of the large dog park area.
Slats would cost approximately $1,354 for the middle section and $2,628 for the large
dog area for a total of $3,982. As the fence was not originally designed to have slats,
these would be added on and will show a small gap between slats.
Staff has investigated two alternative products that may be used to cover the dog park
fence. The first one is Coroplast. This is sign material that is typically used with “lawn
signs” such as election signs. It would be attached to the fence and could be bought in
varying sizes and/or cut to a specific measurement. The cost to do both the middle and
west side of the large dog park would be $935. If it was desired, the sign company that
supplies this material could print messages on it, which would increase the cost to
$1,582. Staff is concerned about this material holding up.
A second option would be banner material. The material could be purchased in sections
(8 or 10 feet long) and attached with zip ties. To cover both areas discussed above, the
price of banner material would be $1,518. If printing on the banners was desired, and
how many areas would have printing, the price would increase to slightly over $3,500.
It was thought that there would be potential for advertising if businesses or organizations
were allowed to purchase space on the signs. However, a policy regarding the logistics
of advertising at the park would need to be discussed.
Dust mitigation – Irrigation for the park had been discussed as a way to mitigate the
dust. Staff had received one bid for $4,233.85. It has been difficult to receive any other
bids for a variety of reasons. Many landscape vendors do not meet the City’s
requirements for prevailing wage. Others had come out, and then turned down the job.
The process was also put on hold at various times during discussions by the City, the
neighbors and the Commission. There was concern by many people involved about the
cost of water and maintenance of the system.
Staff presented information on a product called Durasoil. Durasoil is a dust control agent
that is an ultra-pure, synthetic organic fluid for dust control and formulated to meet the
highest standards of environment efficacy. It is used to control dust in a variety of
settings, including: military trails, equestrian arenas, construction sites, sports fields,
airport infields, orchards &amp; vineyards, event parking lots and unpaved driveways. The
price of the product based on the size of the dog park was reported to be a little over
$5,200. A new bid from the company 2 weeks ago is now estimated at $6,750. Staff is
looking for other companies that may offer a similarly effective product at a competitive
price. Bearing in mind that winter is now starting, waiting to apply a dust control agent
until after the rainy season should be taken into consideration.

Mitigation options summary
Gate relocation $2,500-$3,000
Fence covering options
Slats $3,982
Banner material (non-print) $1,518
Coroplast (non-print) $935
Dust Mitigation options
Irrigation system installation $4,235
Durasoil dust control $6,750
The Pacifica Organization of Canine Helpers (POOCH) reported to staff that they would
be dissolving. POOCH also reported that they intended to donate the remainder of their
fundraising efforts to the City with the intention the money be used for the dog park.
These funds are expected to exceed $9,000.
ATTACHMENTS
Durasoil Information
FISCAL IMPACT
Depending on which mitigation options are chosen, the amount could range from
between $5,100 and $13,732. The $9,000 plus donation from POOCH will be used to
offset this cost.
COMMISSION ACTION REQUESTED
Discussion and recommendation regarding the mitigation options. 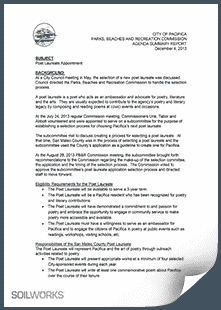