1.Introduction
In accordance with the request of Aguasin, through its Sales Manager, Mr. Fernando Saumann T., the Geotechnical Group of the Pontifical Catholic University of Valparaiso has prepared a test, designed to evaluate the performance of tailing treated with the particulate material mitigating agent against wind effects. The evaluation considers the execution of the activities necessary to characterize the performance of these tailings treated with SOILTAC®, supplied by Aguasin, which corresponds to a copolymer vinyl emulsion, tested in a wind tunnel.

The overall objective of this test is to assess, in a wind tunnel, the drag resistance of particles of a sample of sand tailings treated with a mitigating agent of particulate material.

The specific objectives of the study are:

• Evaluate in a wind tunnel the drag resistance of tailing particles treated with a particulate material mitigating agent, provided by Aguasin.

This proposal includes the activities of characterization and laboratory trials necessary for the determination of the geotechnical properties and evaluation in wind tunnel performance of tailing treated with a particulate material mitigating agent. The tests were carried out with 6 samples prepared in the laboratory of the School of Construction Engineering of the Pontifical Catholic University of Valparaíso. Based on the background information and materials provided by the client, apart from bibliographic technical references, wind resistance is contrasted between tailings treated with a particulate matter mitigating agent and the same tailings with no treatment.

The work was carried out by technical personnel from the Geotechnical Group in the laboratory of the School of Construction Engineering of the Pontifical Catholic University of Valparaíso.

3.1. Geotechnical characterization of the tailings.

The Geotechnical characterization of the material was considered by carrying out the following tests:

The six samples tested in the wind tunnel were prepared from the Quillayes tailings dam of the firm Minera Los Pelambres, provided by the client, to its minimum density, according to NCh 1726/2.n 2009.

The sprinkled solution applied to the samples, as indicated by the client, corresponds to a proportion of SOILTAC equal to 0.11 l/m2 dissolved in ten parts of water.

Wind tunnel tests were carried out according to NCh3266-2012, in batches of 8 hours per sample, with average wind speed of 12 m/s (No. 6 scale of Beaufort), which on land causes the movement of branches on trees and makes it difficult to keep open an umbrella. The tests allow us to determine:

This section presents the results obtained from the laboratory trials necessary for the determination of geotechnical properties and tests in the wind tunnel.

4.1. Geotechnical characterization of the material

The following is a summary of the results of laboratory tests performed on the sample. In Annex A, certificates of studies are attached.

The tests were conducted in the wind tunnel located in the laboratory of the School of Construction Engineering of the Pontifical Catholic University of Valparaiso, as indicated in NCh3266-2012. A summary with the technical specifications of the tunnel used in the tests is presented in Annex B.

The preparation of the samples included filling tailings to loose bulk density with metal castings. For this we used a funnel which allowed free and constant fall of the tailings to its complete capacity and allow for a uniform surface. The average volume of the samples is 3886 cm3. The prepared sample was set aside for about 12 hours, before submitting it to the test in the wind tunnel. The following figures show the procedure followed for the preparation of all the samples.

Figure 4.1. Preparation of sample with tailings to loose density. a) Filling of the sample b) prepared sample

4.2.2. Preparation and application of the dust suppressant.

Table 4.1 – Dosage of the particulate matter mitigating agent for a test tube

Once the volumes of different components were determined, SOILTAC was mixed with water and sprinkled on the sample, according to the specified rate, figure 4.2. The treated sample was set aside for approximately 12 hours before being put to the test in the wind tunnel.

Figure 4.2. Application of the particulate matter mitigating agent to the test sample.

4.2.3. Installation of the sample and the test execution

The sample to be tested is installed on adjustable plane wind tunnel platform; tilt for this series of tests was between 9 ° and 10 ° to the horizontal, Figure 4.3.

Figure 4.3. Installation and inclination of the sample on the support platform of the wind tunnel.

Once the simple is installed on the support platform, the trial begins by applying wind at a specified rate, which in this case corresponds to 12 m/s, with an exposure time of eight hours. Annex C presents the record and the curved wind speed versus time, as applied to the test sample.

For each test, the initial weight of each simple was taken in addition to its initial moisture. After conclusion of the trial, the weight and moisture level of the remaining material in the mold was taken.

Each of the tests were recorded photographically. In the case of the untreated samples, a picture was taken every five minutes. In the case of the treated samples, a picture was taken every 5 minutes, 10 minutes, on the hour, at the fourth hour, and on the eighth hour. The following figures, 4.4 and 4.5, demonstrate the typical performance of the samples without treatment and those with the particulate material mitigating agent, subject to the effect of the wind within the wind tunnel. In Annex D, the photographic record presented shows the performance at different times during the wind tunnel trials.

4.3. Results of the wind tunnel tests.

Six trials were carried out, of which three samples were treated with the particulate material mitigating agent and three were not treated, corresponding to the sample pattern. The weights, moisture, and percentages or loss of the tailings by wind effect reported in the test are presented in the table 4.2. It is important to note that in the case of the untreated samples, the loss of material was reached within 25 minutes, as seen in figure 4.4. In the case of the treated samples, the material loss occurred 8 hours after the start of the trial.

Table 4.2. Results of weights, moisture and percentages of lost tailings of tested samples

In table 4.2 it can clearly be seen that the weight loss in samples not treated with the mitigating agent is far higher to those samples which were treated. The following figures present in greater detail the results of the performance of tailing samples treated with the mitigating agent versus the tailing samples which were not.

Figure 4.6. Changes in weight after tests in the wind tunnel of the tailings without particulate matter mitigating agent

Figure 4.7. Changes in weight after tests in the wind tunnel on tailings with particulate material mitigating agent.

In order to contextualize the results achieved in the tests, an estimate of particulate matter that would be lost in an area of tailings one hectare in size was performed. If the conditions in the area were the same as in the test, i.e. continuous wind speed of 12 m/s for a period of one hour, as seen in figure 4.8, it has been shown that one hectare of tailings without mitigating agent treatment would lose 1,530 t/Ha/hr in contrast to the loss which would be produced in the same surface area if treated with the mitigating agent which would only reach 0.1 t.Ha/hr. It is important to note that this calculation is not exact, as in order to define more precisely the effect of material loss, the characteristics of the site for the tailings, such as roughness, slope, relief, variations in wind speed, ground moisture and durability of the effect of the mitigating agent, among other things, were not evaluated in the wind tunnel test.

Figure 4.8. Equivalence of loss of material per hectare per hour or tailings with and without treatment with the particulate mitigating agent.

A series of tests were conducted in a wind tunnel to assess particle drag of tailings treated with Soiltac, supplied by Aguasin, comprised of water and Co-vinyl polymer. The evaluated tailings were supplied by the client and come from the firm Minera Los Pelambres and correspond to a 19% sandy material under the No. 200 mesh ASTM, classified according to the Unified Soil Classification (USCS) as a silty sand (SM) system.

• For the samples treated with the particulate material mitigating agent losses of tailings in the wind tunnel reached on average only 0.3% of the initial weight, after eight hours of exposure to constant 12 m/s wind speed.

All of the samples were tested with the same type of tailings, under similar conditions of density, wind speed and exposure the effect of the wind, differentiating only in those which were treated with the particulate material mitigating agent and those which were not. The results obtained confirm the efficiency of the particulate material mitigating agent made up of a mixture of SOILTAC and water at a 1:10 in volume, applied at a rate of irrigation of 1.2 l/m2 on the tailing with a loose bulk density, to avoid the entrainment of particulate material when subjected to an average wind speed of 12 m/s.

The professionals responsible for the preparation of this document have been Dr. Ing. Juan H. Palma G. and Mg. Ing. Pamela Valenzuela T. 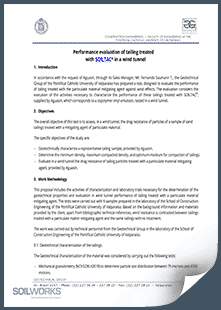