CNG wins back-to-back at All Army 4

The blade on the grader operated by the California National Guardsmen is nearly as wide as the road itself. They are buf- feted on one side by a hill; the other side is a precipitous drop-off 30 to 40 feet down a canyon. Call it nerve-wracking, call it har- rowing; these guys call it a day’s work.

In addition to filling smugglers’ tunnels, re- pairing border fence and digging drainage ditches, engineers with the CNG’s Coun- terdrug Task Force are often called upon  to rehabilitate back-country roads used by U.S. Customs and Border Protection agents to patrol the U.S.-Mexico border.

On Jan. 22, four Task Force Soldiers worked deep in the switchbacks near the peak of Otay Mountain repairing roads 100 pain- staking feet at a time.

“The work my guys do out here  makes the roads safer, easier to access and allows for a faster response by Border Patrol,” ex- plained 1st Sgt. Frank Guizar.

The day had actually started the night be- fore. With a two-hour turnaround time be- tween the site where the engineers load up their raw materials and the road project, time was of the essence.

“We’ll typically prepare a load of class 2 gravel in the dump trucks for the next day as one of our last tasks of each day,” explained noncommissioned officer in charge Staff Sgt. Joseph Camellari.

As with everything along these roads cut- ting up and down the mountain, the mix has to be just right.

“You really only get one chance at this,” said Staff Sgt. Peter Spackman of National City, Calif. “Too dry and it separates once it hits the roads. … Too wet and you’ll never get it out of the dump trucks.”

Before the crew could begin working on the road, a grader had to smooth down the sur- face, knock loose any large rocks and pre- pare it to take the gravel. One-by-one the dump trucks dropped their cargo of gravel infused with Soiltac® —  a  polymer-  based emulsion that stabilizes soils from erosion.

“We like to refer to it  as  bondo  for the road,” Camellari added.

Once the gravel was laid down, the grader came through again, smoothing down the rough patches. The final step — tamping down the gravel — was accomplished as Border Patrol agents crossed back and forth across the road, their eyes facing south.

There’s only one problem — these types of roads need constant rehabilitation.

“At least once a year we’re out here, repair- ing these roads,” Spackman said.

The once-a-year schedule assumes a Janu- ary rain doesn’t flood out the road and run- off from the mountain doesn’t wash it out.

“We do regular rehabilitation of the roads,” Camellari said, “but if Border Patrol identi- fies a stretch of road that needs work for whatever reason, we’ll do it.”

Even as budget constraints reduce Camel- lari’s resources and ability to take on projects, the hard-set noncommissioned officer makes one thing exceptionally clear: “Safe- ty is our top priority – safety for my Sol- diers … and the safety of the agents we’re out here helping with the work we do.”

Wrapping up the day, Guizar put the exclamation on Camellari’s point.

“When we started working out here, this road was nothing more than a goat trail,” he said. “A narrow, treacherous goat trail. The work my guys have done has made it safer for Border Patrol as they protect us.” 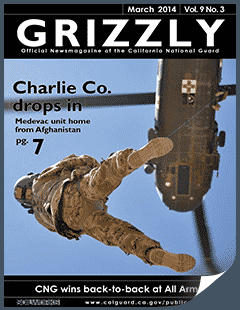