DESCRIBING: In the world of high-performance racing, the tires look more like they belong on ramps than on the track, but with recent advances in tire technology and tread patterns/compounds, paired with smooth, semi-paved tracks, brands like Maxxis have developed tires specifically for top-tier riders. The Torch is the newest tire to be added to their long list of winning treads. The Torch is based around Maxxis’ lightweight, puncture-resistant Silkworm casing and Kevlar folding bead.

The tires’ extremely low-profile tread pattern is supercharged with a micro-grooved, directional tread pattern and is composed of two rubber compounds to provide high-speed performance in a straight line and increase the bite potential when turning. The tires are available in popular pro sizes of 1.5, 1.75 or 1.95 inches, and start out at only 10.8 ounces.

TESTING: Since we have been easing into the minimalist/ performance  tires for racing, it was not as much of a shock to us to see such a low-profile tread design as it may be for some who are making the move over, even from some of Maxxis’ other performance treads like the DTH. The thought is that the tire isn’t for every racer, but with the direction racing is going, it very well could be in the next year or so. Of the five tracks within an hour of our office, all are well-groomed, hardpacked and ideal for a tire of this sort. The micro-grooving finds bite in the small imperfections of the track surface, and as testing has gone to show, the Torch tires actually hook up better on tracks like this than aggressive tread patterns, which are hindered by a reduced contact patch with the track surface. This means we can run a narrower tire for reduced rolling resistance and still find superior traction.

But it is not the straights that had us worried; it was the gates and turns where the tires would really be put to the test. While gates are cement and should have ample traction, it is the tire’s ability to find purchase when there is inevitably dust and dirt on the cement’s smooth surface, which are prime conditions for burnouts. After a few hundred gates over the course of a month, we only managed tire slip under the dirtiest gate conditions, which were far from any we would expect to find on race day, even at a local race. So, at the national level, we would expect this tire to prove a near flawless record.

Transitioning from the gate to the track was seamless, and our first few cranks out of the gate, where a tire is under the most load, were strong, and the Torch hooked up surprisingly well. In turns, the soft-side tread compound hooked up well, but get into the soft stuff trying to make a pass at the top or bottom of the turn and don’t expect it to save you. Remember, this tire is designed for ideal, well-groomed track conditions, and the soft stuff is neither.

Where these tires truly shine is through paved turns where traction and lines are limitless. Now, while this is a great tire for optimal conditions, it does not deal with wet or soft conditions well at all. We even found that a freshly watered track that isn’t Soiltac’d can become like an ice-skating rink, so you have to use caution, even when the tracks are being sprayed between motos. This noted, the Torch is easily the fastest tire we have ever raced with, but it is an extremely high-performance tire · that needs to be treated as such. So evaluate your local track conditions before you decide to give the Torches a try, and if they are less than ideal, talk which are hindered by a reduced contact patch with the track surface. This means we can run a narrower tire for reduced rolling resistance and still find superior traction.to your track operator about grooming it up and run DTHs in the interim.

PRICING: Get yours for about $39 each in all sizes or check out www.maxxis.com for more info. 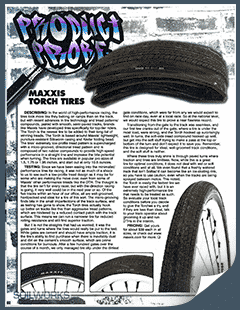