The Public Lands Foundation presents the Arizona Off-highway Vehicle Coalition with a 2014 Landscape Stewardship Certificate of Appreciation and this Citation. The Foundation grants this recognition to honor private citizens and organizations that work to advance and sustain community-based stewardship on landscapes that include, in whole or in part, public lands administered by the Bureau of Land Management (BLM).

Since a partnership began in 2008, the coalition has committed substantial time and effort towards the BLM’s air quality program culminating with the Best Management Practices (BMPs) for unpaved roads. The Hassayampa Field Office’s most popular OHV staging area, a ten-acre site known as the Boulders, was treated with DurasoilTM for $14,000 using appropriated funds in 2008. In 2011, the Coalition let a contract to apply a soil hardener to an ABC gravel mix on the access road to the Boulders staging area. The result is a hard, pavement-like gravel road that produces much less dust that native soil. Combined with a 15 mph speed limit, this solution complies with the county’s emission rules. This same method was used to improve another OHV staging area road in the Table Mesa Recreation Area in 2012. And, after two years of heavy use, the surface is still performing well.

A cooperative agreement between the BLM and the Coalition has provided benefits to the public, the Coalition’s membership and the BLM’s program for managing air quality. Inclusion of the Best Management Practices into the Dust General Action Permit and receiving positive feedback from Maricopa County Dust Inspectors regarding dust emissions was a big accomplishment.

The assistance provided by the Coalition was an effective response to an emerging public resource management challenge on a landscape level. Looming dust citations from Maricopa county Air Quality Division threatened off-highway vehicle use on BLM-managed lands near the metropolitan Phoenix Area.

The Coalition’s leadership on the air quality Best Management Practices (BMPs) developed over the last six years pushed the applied science behind this achievement. In 2013, Maricopa County received the coveted Attainment Status for the air quality area surrounding Phoenix called Area A. BLM now has approved methods to comply with the County’s dust rules.

The BLM’s relationship and trust with the off-highway vehicle community has been improved as a result of the achievements in air quality management.

The Public Lands Foundation is pleased to present the Arizona Off-highway Vehicle Coalition with its 2014 Landscape Stewardship Certificate of Appreciation and this Citation for invaluable contributions to the stewardship of America’s public landscapes. 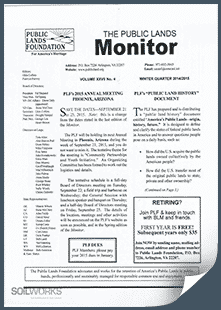