SIERRA ARMY DEPOT, Herlong, Calif – -The availability of water is something we take for granted when a faucet or sprinkler system is turned on every day.

In February, a drought emergency was declared in the State of California by Governor Jerry Brown. In addition, President Barack Obama directed Federal facilities within the state to take steps to immediately curb water use, including a moratorium on water usage for new, non-essential landscaping projects and to redouble efforts to fulﬁll prior commitments to longer-term water use reduction.

Sierra Army Depot, located in the northern portion of the Sierra Nevada Mountain Range took the necessary steps to comply with the Presidential Directive and Governor Brown and to improve water use efﬁciency for drinking water by 26 percent and reduce industrial, landscaping, and agricultural water by 20 percent.

Not only did Sierra comply but reduced their water consumption by 51%. How? Several factors played a key role.

The primary water reservoir built in 1943 started losing water on a daily basis, with an estimate of approximately 1,250 gallons per day. The Depot recently replaced the old outdated water towers with a 1.1 million gallon subsurface reservoir.

Dust control and suppression were another area where Sierra used an enormous amount of water. Almost every day employees are faced with working outside in conditions where high winds blow dust, sometimes in excess of 50 miles per hour. This makes for extreme working conditions. In order to keep the mission going, Sierra has been using hundreds of thousands gallons of water on a weekly basis to keep the dust down to a minimum.

To keep within the spectrum for the Army’s water conservation, the Depot invested in a hydro-seeding project for the larger areas that would normally be sprayed with water to prevent the blowing dust. This project has reduced the water usage to approximately ten to twenty million gallons per quarter. In addition, the Depot is using Dura-Soil on the dirt and gravel roads to keep the dust down, thus saving on water usage.

Residential watering is now monitored and all employees living in Depot housing were issued a water conservation plan. Watering or the lawn is limited to thirty minutes every other day, ﬂower/vegetable beds are hand watered only, and residents are prohibited from washing privately owned vehicles in the street. This watering plan has reduced the residential watering from 420 hours per week to approximately 54 hours per week.

Various areas of the Depot are checked frequently for drips, leaks, and broken lines.

Using a bit of preventive maintenance and precaution is allowing Sierra to be more conservative on water usage.

All of these efforts have reduced the water usage, and also serves as part of the Depot’s Net Zero initiative as there is less run time on our pumps and treatment facilities, saving on energy costs. 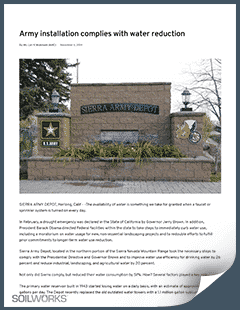