MINUTES OF A MEETING OF THE HASTINGS DISTRICT RURAL COMMUNITY BOARD HELD IN THE LANDMARKS ROOM, GROUND FLOOR, CIVIC ADMINISTRATION BUILDING, LYNDON ROAD EAST, HASTINGS ON MONDAY, 2 MARCH 2015 AT 2.00PM

That apologies for absence from Councillors Kerr and Lester be received and accepted.

There were no declarations of conflicts of interest.

The Transportation Operations Manager, Les Glock, drew the Boards attention to the appendices attached to his report which outlined the status of the various works programmes.

He also tabled two further documents which photographically illustrated the works, before and after in respect of a late 2014 flood damage claim (CG-13-26-049), and the auxiliary works which had been completed between December 2014 and March 2015 (CG-13-26-048)

He advised that there were still some 10-15 drop-outs still to be dealt with.

It was explained that subsidy claims to NZTA in this form were well received by its Officers.

It was noted that these would be a regular addition to his reports to the Board. Board members agreed that the presentation of the information in this form clearly illustrated the situation.

Mr Glock also tabled information regarding a polymer based soil stabilisation/dust control material (Soiltac) which it was proposed to trial on a 150m section of unsealed road which was subject to logging truck traffic.

The meeting discussed general concerns regarding maintenance works including:

i)                    Waitangi Road dust/speed nuisance. It was noted that the majority of this road was in private ownership of some sort or another and although the Council maintained the first 400m of the road which was considered to be public road, the responsibility for the rest of the road lay with the owners.

iii)                 Verge mowing. The meeting was advised that mowing of verges on the well-used sealed roads was carried out 4 times a year at times to suit the growth, but on unsealed roads it was only once each year. In addition the mowing height was 300 mm.

iv)                Bridge works: The meeting was advised that there would be some work carried out to repair bridge joints, decking cracks plus some minor structural repairs, as part of the works programme.

v)                  Increased weight of heavy traffic: The meeting noted that applications to run heavier trucks on District Roads were dealt with on a road by road basis so that staff could assess the likely effects. While loadings were increasing the vehicles were also becoming longer which meant that point loadings on the roads were generally not increased. However in assessing the weights of vehicles using the bridges the gross weight was also a consideration and this was where the heavier loadings had more relevance. The longer vehicles also had implications in relation to the corners on the roads.

The Council’s Waste and Data Services Manager, Martin Jarvis, entered the meeting to update members on the progress being made to implement the Rural Recycling scheme.

He and the Group Manager Asset Management, explained that work was proceeding on the manufacture of the containers to be used for the recycling and that appropriate locations had been identified in each of the agreed communities. It was noted that a site which suited the Community had been found for the container in Waimarama however as this located on the reserve, generally in the vicinity where the trial took place there were some legal hurdles to get over before the installation could be confirmed.

It was agreed that it would be appropriate for the Waste Minimisation Officer, Angela Atkins, to report to the next meeting of the Board on the work

There were no extraordinary business items.

The meeting closed at 2.55pm 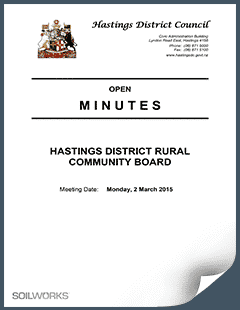