As a science journalist, I get umpteen press releases about scientiﬁc research. About 75% of the time, scientists claim they’ve reached some kind of breakthrough in their ﬁeld.

But is that true, really? Every year, thousands of studies are published. Discoveries are made, materials are invented and innovative technologies are created. Very few developments in the ﬁeld of science and technology can be considered breakthroughs though.

Over the last century, there have been some groundbreaking discoveries that have changed how the world works or added exponentially to our understanding of the universe. Even the uninitiated can name a few: discovery of the DNA helix, discovery of the antibiotic penicillin, invention of the airplane and man’s landing on moon.

But really – what’s a breakthrough in science? I went to the experts to ﬁnd out.

“I consider scientiﬁc breakthroughs as a technical or scientiﬁc advancement that changes how we view things, or how we operate, “says Jon Weston, M.B.A., President and Chief Executive Oﬃcer of BioCare Systems, Inc., a company that has developed infrared LED light therapy technology for pain relief. “In other words, a fundamental shift in perspective and practice.”

Weston gives the example of Australian researcher Barry Marshall. Marshall observed an association between duodenal ulcers and the presence of H. Pylori bacteria. “He subsequently determined a causative relationship that fundamentally changed the way we view ulcers – from acid and stress to bacterial infection,” says Weston. “This transformed treatment of ulcer from management of stomach acid to curing the condition with antibiotics.” Marshall won the Nobel Prize in Physiology in 2005.

In short: breakthroughs in science solve our seemingly impossible or improbable problems and make our lives signiﬁcantly better. Or they radically change the way we look at things.

How breakthroughs are realised?

How are scientiﬁc breakthroughs achieved? What goes on inside labs of minds who achieve groundbreaking results? “Scientiﬁc breakthroughs begin with an observant eye and a predisposition to connecting the dots,” says Weston. “Normal discovery/invention tends to be progressive or incremental improvement in current methods or technologies. Breakthroughs occur when an observation is made that lines up with a whole new way of looking at a problem, a medical condition, or at the way things work.”

Scientists who achieve breakthroughs often have to challenge the status quo. Raise hell, so to speak. Chad Falkenberg, founder of Soilworks, a company that makes a revolutionary dust suppressant product, Durasoil, says, “There has to be a mindset that allows for open discovery. By that I mean you have to question everything. If the current solution isn’t solving the problem, it’s our responsibility to keep iterating until we ﬁnd the best solution.”

But the ironical thing is most developments that go down in history as breakthroughs often don’t get recognition until much later. “My reading of the historical record indicates that almost never is a particular claim understood as a breakthrough immediately,” says Michael D. Gordin, a professor in the department of history at Princeton University and author of Scientiﬁc Babel: How Science Was Done Before and After Global

“Even when a scientist thinks he or she has made one — and they can be wrong about that (either it isn’t a breakthrough, or the results are wrong altogether) — the scientiﬁc community takes a while to process a judgment about the validity of the claim.” Gordin further adds that “since the deﬁnition of a breakthrough is a community matter and always happens after the fact, in most cases the process is not distinguishable from less monumental ﬁndings.”

Falkenberg regards that discovery of the Higgs Boson as one of his favourite breakthroughs of the recent past. “The Higgs Boson discovery is a fascinating discovery to me because it helps prove that our understanding of the basic workings of the universe is probably correct, “says Falkenberg. “Without the Higgs Boson or God Particle, our standard model of how the universe was created would be still be searching for the missing gaps.”

Weston thinks some current innovations have potential to become future breakthroughs. For example, driverless cars. “Driverless cars completely change how we view transportation and connectivity to others,” says Weston. He is also counting on bio-mechanical prosthetics and nano robotics.

Moreover, experts at Thomson Reuters have identiﬁed, as this FastCoExistPiece notes, ten potential breakthroughs of the future. These developments have the power to change how the world works by 2025. For example, most of the world’s energy needs will be met by solar power ten years from now. Electric-run airplanes may become the norm and teleportation a distinct possibility a decade from now. The article also notes that personalized medicine will drive the next wave of breakthroughs in medicine, as drugs would be prescribed based on a person’s unique genetic constitution.

For those interested in more future breakthroughs, this piece in Scientiﬁc American will make for an interesting read. 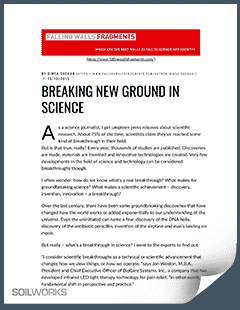