A new biodegradable product may be the solution to keeping dust at a minimum on job sites
Figuring out how to control dust is a common dilemma for oil and gas companies. Whether it’s on a road to a rig or at a job site, keeping dust at a minimum can be a constant and
cost ly endeavor. Getting dust under control is important. Winds can turn untreated soil into dust, which can lead to mechanical, environmental and health problems. A new patented product from Soilworks Inc. looks to replace the water- or oil-based solutions currently used to keep dust under control. GTL Durasoil sprays on like water, but will last from nine to 16 months, says Soilworks founder Chad Falkenberg. Durasoil also doesn’t contain any products that need to be filtered out, he adds.

“We had this product under development for two years. It’s derived from clean and affordable natural gas,” Falkenberg says. “It’s a green and effective synthetic dustsuppression fluid.”

Durasoil works by controlling dust on the micron level by “wetting out” any soil or aggregate, Falkenberg explains. The process weighs dust particles down like water, but without evaporating or freezing. It ut ilizes technology that turns gas into liquids.

“Durasoil is a game-changer for companies since they can put an application on and have it last months instead of just days or even hours,” he says. “It behaves just like water but doesn’t dry out.”

“They were looking for a product that could create instant helicopter padson the ground. What they had was a little bit like Magic Shell on ice-cream – you put it down and it hardens, but cracks can develop or parts can break off and they didn’t want debris flying up into the air or anything like that,” Falkenberg says. “Durasoil breaks down slowly over time – there’s no crust or anything like that.”

In addit ion to using water to suppress dust, some companies use petroleumbased suppressants or synthetic fuel derivatives. Those products, however, can leave behind a residue while Durasoil is biodegradable and won’t leave a residue, Falkenberg says.
Durasoil is applied just like water and companies can use the same equipment as they do for applying water. The product is clear and is odorless so it can be used indoors.

“You use the same amount of Durasoil on a site as you would use water,” he says, adding it can be used in freezing or wet conditions. “You may even wind up using less since many people use more water thinking the more they add, the longer it will last.” Companies using Durasoil often save on costs since less product is used, Falkenberg says. In addition, businesses save on the costs associated with labor, transportation or insurance related to  aking a water truck multiple times to a location since just one application of Durasoil is needed. “It oxidizes over time in the sun and doesn’t leave anything behind,” he says.

A new biodegradable product from Soi/works may be the solution to keeping dust at a minimum on job sites. 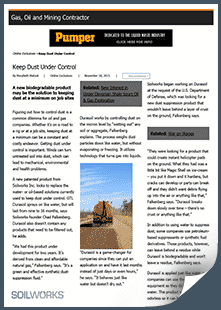