Bradley Angel announces that last week there were complaints on illegal dumping, one which seemed to involve pesticides. The DTSC received the alert and has begun to work on this.

Other complaints were of illegal burning of materials in the neighborhood, and reports of raw sewage smells.

Lee’s presentation addressed four topics: the current status of cleanup, the explanation of plans to leave waste on site (focusing on Parcel E-2), protection from sea level rise, and the health effects of dust suspension during remediation.

The Navy has conducted over 25,000 soil samples, and over 14,000 groundwater samples. How do they figure out where to sample? First, they look into the history of the space, to have a sense of what contaminants might be there. Then, they conduct soil samples.

They determine the potential exposures, based on the future use of the parcel. The future use of a parcel helps agencies and the Navy decide what level of cleanup is needed, and what the likely exposures will be. Parcel E-2 will be a park, so the exposure pathways are those of the types of activities people will do at a park (e.g. direct contact with soil).

Based on the risk assessment, they set cleanup goals, and come up with a package of solutions. At Parcel E-2, they will excavate soil and sediment to remove contaminants from the surface.

As of mid-2015, the Navy had removed 34,000 truckloads of chemically contaminated soil from across the shipyard. 2,850 truckloads came from Parcel E-2. In addition, the Navy has

removed 28 miles of sewer/storm drains from across the shipyard (and 2% of these required disposal as radioactive waste).

They will place a “durable cover” across the entire site, as an extra layer of protection. Lee knows of no other BRAC cleanup site that is doing this (so Hunters Point is unique).

A Bayview Hunters Point (BVHP) residents asked Lee – Why are they leaving waste?

Lee answers that the EPA has asked the Navy this question, and asked them to do an analysis of what it would take to remove the landfills at Parcel E-2. They also paid for a TAG grant for a community group to hire experts to conduct an independent analysis. The Navy analysis concluded that 1.66 million cubic yards would have to be removed, and this translated into 100,000 trucks that would drive through the neighborhood. Additionally, they would also be moving the waste into another community – taking these factors into account, the best environmental solution would be to leave the waste in place. (The waste would go to places like Buttonwillow, US Ecology in Idaho, ECDC in Utah, and a few other places).

The barriers to be put in place at E-2 include synthetic materials with long life spans. They will insert a layer of high density polyethylene (HDPE), then a geosynthetic layer, and then a layer of soil. There will also be a sheet pile wall, and HDPE wall, a slurry wall, a revetment wall, and a sea wall to protect E-2 from sea level rise.

A BVHP resident asked – if these protections are in percentages, then some percentage of the waste will eventually escape, and someone will be exposed. Also, what about the event of an earthquake?

Lee answered that the landfill cover and methane gas system would be activity managed, that the Navy, the EPA, and the DTSC will do inspections.

Marie Harrison (Greeanction) raised the point that Envirostar (where community members can find all the technical reports on the shipyard cleanup) is not easy to navigate, and that not everyone in BVHP is computer literate, nor does everyone have computers.

Lee answered that there is a 3rd  floor Superfund Information Center in the EPA office, which is open form 8am-5pm, and that someone is available to answer questions. Also, according to a representative from DTSC, you can sign up for alerts on the Envirostar website, so that when a new document is finalized, you will get an email with a link to that document. According to a resident, it is really difficult to read these reports and have a sense of what they are saying.

Long term monitoring and other forms of protection will keep contaminants in place. The Navy, the new owner, and state agencies will continue to do inspections.

Other protections include land use deeds that prohibit growing vegetables as an extra protection. A BVHP resident said that she felt that planting vegetables is something she should be able to do if the ground is safe.

The Navy has its own dust control plan, which includes spraying down piles of soil, spraying “Gorilla-Snot®” (a sticky substance that holds dirt down), “rumble sticks” that are bumps and make dust fall off trucks, and a speed limit for trucks on the base. The Navy has also changed its contract structure, so that one contractor covers the entire base (rather than separate contractors for different parcels). The EPA has also asked the Navy to do a better job (based on an IVAN complaint).

Eric Brooks (Our City, San Francisco) comments that the EPA is confusing the term “cleanup” with “containment”. Moreover, it’s not possible for any containment systems to contain everything, with many of these contaminants there is no safe level of exposure. We need complete removal, and to abide by the precautionary principle.

A BVHP resident asked, “What prompted the EPA to cleanup the Presidio, but at Hunters Point it is a mixture (including contamination). The answer is that the Presidio is not a Superfund site, so the EPA has not had an active role in it. State agencies would be the lead here.

Regan Patterson (Greenaction) summarized many of the questions voiced by residents that evening: Why containment at Parcel E-2, rather than complete removal? Also, what are the risks for certain materials that will be left underground?

The DTSC representative responded that it will be safe to live at the Hunters Point Shipyard. Moreover, all of this has been decided years ago, the Navy has already gone through the appropriate public process.

Bradley Angel observed that there has never been a cumulative impacts analysis for Hunters Point residents in relation to the shipyard. Also, if you go to the SF Shipyard website (Lennar), you don’t see anything about the radioactive ships that came back from nuclear testing, it is as if this didn’t happen.

The next meeting is Wednesday, February 17th, from 2-4pm 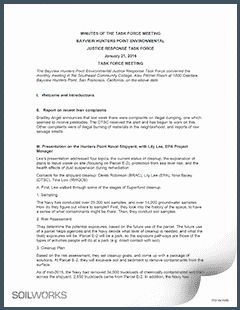