State environmental officials are seeking fines of up to $10,000 a day from a landowner
whose denuded field near San Simon is blamed for dust storms that resulted in three
multiple-vehicle accidents and forced eight closures of Interstate 10.

The interstate east of Tucson has been shut down for up to ﬁve hours on each of the past three windy afternoons.

“We thought we were working with someone who was cooperating,” said Caroline Oppleman, spokeswoman for the Arizona Department of Environmental Quality. “We expected this to be treated urgently.”

The Phoenix-based landowner, David R. Turner, signed a consent decree Monday in which he agreed to cease any tillage of his land, water it and apply a chemical stabilizer that will form a crust over soil that has been blowing across I-10 intermittently for the past six weeks.

Oppleman said in an email that Turner has been “slow to comply with the terms of the consent order. Therefore, we are redeploying state resources to mitigate the dust issue and will be pursuing escalated enforcement including penalties of up to $10,000/day.”

Turner has not responded to repeated Arizona Daily Star requests for comment over the past two weeks.

In the consent agreement, Turner agreed to apply a “tackiﬁer” to the 320 acres of the dusty acreage that are closest to I-10. Oppleman said the substance, one brand of which is called Gorilla-Snot, can last for up to six months, in which time a cover crop can be grown.

Wind is possible in the area again Wednesday and over the weekend, said Mike Cantin, chief meteorologist at the Tucson oﬃce of the National Weather Service.

Trooper Kameron Lee, spokesman for the DPS, said the weather service has been “spot on” with its wind predictions, allowing his department and state highway oﬃcials to station observers and shut down the highway before accidents occur.

Lee said the closures have been happening mostly between noon and 5 p.m. Motorists with ﬂexible travel plans should watch for weather forecasts and wind advisories and avoid those times on windy days, he said.

Cantin said the weather service has set a lower threshold for dust advisories at the site where “dust starts to ﬂy at 15 mph — lower than usual.”

The site is just west of San Simon, where Turner’s company began clearing land in late fall or early winter, according to witnesses.

More than half of the 640-acre plot closest to Interstate 10 would be treated with chemical stabilizer, according to the consent decree. The other half would be watered until is planted with trees and regularly irrigated.

The stretch of I-10 just north of the site has been closed three times for accidents since April 7 and closed ﬁve times as a precaution. That forces motorists on a 110-mile detour through Saﬀord.

The frequency and severity of wind conditions at the site are normal for this time of year, said Cantin. He said high winds can be expected for the next couple of weeks, before the storm track moves northward and high-pressure settles over the area for the pre-monsoon warm-up. 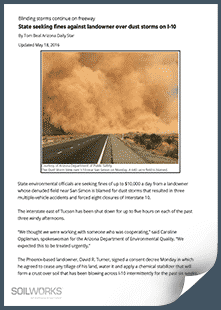