SAN SIMON, Ariz. ­ It sounds like the punch line to a somewhat crass joke, but it’s actually a proposed solution to major transportation issue in southern Arizona: Gorilla­-Snot.

There are several products that go by the name, including hair gel and drumstick grip. But officials hope this version of primate mucus will stop Interstate 10 from closing due to dust, as it’s done several times this spring.

Dust blowing from cleared farmland near San Simon has forced a 60-mile closure of I-10 near the Arizona-New Mexico border seven times since April 7, according to a tweet from Department of Public Safety official Kameron Lee.

Twitter: “Since April 7th which was our first dust collision we have closed the Interstate 7 times, including today – Kameron Lee, PIO (@dps_pio_lee) May 17, 2016”

The Arizona Department of Transportation announced last week it would work to water down the land to keep the dust down. Sometimes water just doesn’t cut it.

“Ninety or 100­degree days, as soon as that water evaporates the dust is just going to get airborne again,” said Karol Clark from Soilworks, a Scottsdale­based company that makes the glue. “Water is not an effective solution, because the soil doesn’t have any clay in it.”

That’s where Gorilla-­Snot comes in.

“How many children have taken a finger full of glue and popped it in their mouth?” asked Clark, “It’s not toxic.”

Soilworks says on its website Gorilla­-Snot links and cross­links particles together, creating a flexible crust or on an area it’s spread.

It’s already used all over the world.

“We’ve been overseas with military applications,” said Clark, “but being able to solve a problem right here in our own backyard is a great thing.”

The land owner is cooperating, but ADOT’s release noted that authorities were tracking expenses spent on the closures and efforts to stop the dust, and the land owner could be forced to reimburse the state.

ADEQ officials told 12 News the owner could also face fines up to $10,000 per day if he doesn’t comply with terms of an agreement they made before taking on this Gorilla­-Snot project, which may cost about $200,000. 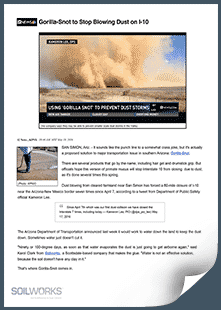