For the past few weeks, a section of Interstate 10 in southeastern Arizona has been plagued by blowing dust from a nearby field. But now the state of Arizona has a secret weapon: Gorilla-­Snot.

Since April 7, authorities have closed a 60­mile stretch of I­10 seven times, forcing travelers to take a 110­mile detour because of massive plumes of dust wafting over the roadway. The Arizona Department of Public Safety responded to multiple collisions in the area because of the low visibility, according to DPS Trooper Kameron Lee.

In recent weeks, winds have picked up dust from a field that was cleared, but not planted on, near San Simon.

State officials spent several days watering the land in an unsuccessful effort to keep the dust grounded. Authorities said Tuesday they are seeking fines of up to $10,000 a day against the farmer who owns the land. A spokeswoman for the Arizona Department of Environmental Quality said they believed that the landowner was cooperating at first but that he’s acted too    slowly.

Scottsdale based company Soilworks’ product is comprised of long nanoparticle molecular structures that when sprayed or poured over soil creates a barrier to control dust from being swept up into the air. Applying it creates a light surface crust that remains permeable to water and air while keeping the particulates that create dust storms and degrade air quality from   escaping.

ADOT, DPS, ADEQ and the Arizona Department of Agriculture have been working together on the problem.

Video. Blowing dust forced the closure of a stretch of I-10 for extended periods of time during the past several weeks after the Arizona Department of Public Safety responded to multiple collisions in the area of San Simon. Wochit

Soilworks sent ADEQ almost 45,000 gallons of the snot to apply liberally to the trouble area. Gorilla-Snot is environmentally safe and can even be customized with color pigments to blend into the surrounding terrain, according to the company.

ADOT, has changed speed limits in the area from 75 mph to 65 mph between mileposts 374 and 378 in both directions on I-10, Lee said. Over the past few weeks, portions of I-10 in the southeast corner of the state have been closed off and on due to blowing dust brought in by low-pressure storm systems moving in from the Pacific Ocean. 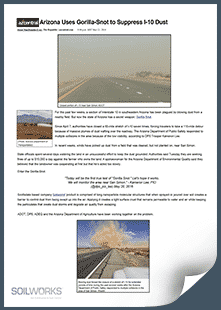