SCOTTSDALE, AZ (KPHO/KTVK) – State officials hope an environmental glue manufactured by a company in Scottsdale will prevent any more I-10 dust closures in southeastern Arizona.

Image. Gorilla-Snot is like a glue and is white but dries clear. (Source: KPHO/KTVK)

“It looks just like glue, it has the same consistency,” said Karol Clark with Soilworks. The name of their product may stick with you.

“It’s called Gorilla-Snot,” Clark said. “It basically makes a crust, a -D cap on the dirt, gluing everything down.”

She said they are working with another company to mix the Gorilla-Snot with water and spray it on about half of the 00 acres of freshly plowed farmland near San Simon, Arizona that we’re told is the source of the dust.

According to a spokesperson for the Arizona Department of Public Safety, when winds are around 15 miles an hour or stronger, the dust is kicked up and moved across the Interstate, limiting visibility. They said they have had to shut down a 50-mile stretch of the highway seven times since April.

Image. Gorilla-Snot is being used to keep dust down at a farm in southeastern Arizona. (Source: KPHO/KTVK)

“We make it from scratch, it’s not a by-product of another thing,” Clark said, speaking of the Gorilla-Snot. “It’s very environmentally friendly.” Clark said it goes on white, but dries clear. It’ll take a few days to spray the area and should last six to twelve months.

“It’s going to eventually UV break down, and he’ll be able to plant his crops,” Clark said.

Wednesday to discuss the dust.

Image. Gorilla-Snot is made from scratch and is reportedly environmentally-friendly. (Source: KPHO/KTVK)

The Arizona Department of Transportation said they helped bring in water trucks last week, and will try and recuperate costs from the farm owner, David Turner Ministries.

The Arizona Department of Environmental Quality said they’re paying for the Gorilla-Snot initially, but call this “unacceptable,” saying Turner has been slow to comply and they may fine him.

We reached out to someone on behalf of the farm again and were told they have no comment. 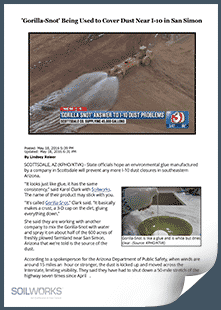