SAN SIMON – After weeks of what oﬃcials have labeled a safety threat, the owner of a piece of empty farmland near San Simon could be held responsible for blowing dust.

Experts say the dirt here is made up of very little clay, which is why water has not helped to keep the dust down.

The Arizona Department of Environmental Quality said the farm’s owner, David Turner, was new to the area and was unfamiliar with Arizona soils.

The state agency said he was working with them to come up with a plan to ﬁx the problem, but was too slow to deliver.

Now ADEQ is turning to chemistry to do the job. It has contracted Soilworks, a dust control company out of Scottsdale, to take over. It is using a product it likes to call ‘Gorilla-Snot’ to tackle the dust.

“Essentially it’s kind of like a glue, it’s a vinyl co-polymer,” said Luke Short, an account executive with Soilworks.

Blowing dust from the ﬁeld has shut down I-10 near San Simon seven times since April 7. Those who travel this stretch of highway often are getting tired of the detours.

“Extra gas out of my pocket. I’m going through quite a bit more fuel,” said Kevin Burnett, a salesman who drives the route for work.

Soilworks, plans to spray nearly 47,000 gallons of is biodegradable ‘Gorilla-Snot’ on the ﬁeld.

“The desert Southwest has a great need for dust control, including many industries that you may or may not think of, whether it be mining, coal, or in this case, farming,” said Short.

ADEQ is considering ﬁning the farmer $10,000 per day, but has not done so yet.

“I think it’s great, but I don’t think we should have to pay for it, the taxpayers. I think the farmer should,” said Burnett.

Work should be ﬁnished by Friday and should keep the dust down for six to 12 months. 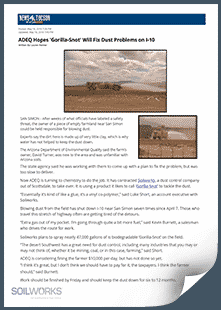