PHOENIX (AP) – The state of Arizona this weekend is slated to finish adding a chemical stabilizer to a farm that’s caused several dust storms that shut down Interstate 10, sending drivers near the New Mexico state line on a long detour.

The Arizona Department of Environmental Quality says it’ll likely complete layering one half of the farm – that’s 320 acres – on Saturday. Spokeswoman Caroline Oppleman said the landowner will take over applying the stabilizer to the other half of the farm on Sunday.

Image. Gorilla-Snot is like a glue and is white but dries clear. (Source: KPHO/KTVK)

She said last week that the department would likely seek fines of up to $10,000 a day against the landowner because he didn’t act fast enough in controlling the situation.

The department is spending about $200,000 on the treatment. Last week, the state spent about $20,000 a day for several days watering the farm to no avail. It said it will seek reimbursement from the landowner.

Officials have shut the highway down at least seven times in the past few weeks as dust storms have created low visibility on I-10 near the San Simon exit, creating an approximate 60-mile detour.

The closures have caused headaches for drivers whose commute has been extended by hours. But authorities say that’s better than car accidents and other dangers posed by the low-visibility brought on by the storms.

The Department of Transportation said it spent about $20,000 a day last week watering the land in an effort to control rising dust. But the water did little to contain dirt that was easily picked up by dust after the landowner readied for planting but never seeded, leaving loose soil.

Climatologists say that a dry winter coupled with land practice use has contributed to more dust storms this year. 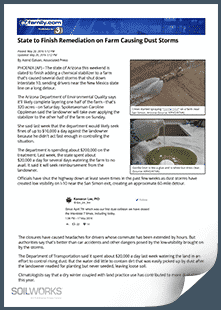