SAN SIMON — A “mostly uneventful” weekend followed after a State agency “re-deployed” its resources in dust mitigation efforts after several I-10 crashes and numerous closures near San Simon over the past month.

A 62-mile stretch of the Interstate has been closed 10 times due either to crashes or as a precautionary measure to prevent them.

“We monitored the area daily and, though some minor dust blew, we did not have to close the interstate,” he told the Range News. “We are hopeful the ‘Gorilla-Snot®’ will work as we are expecting some winds Wednesday.”

The problems began after a Scottsdale-based Ag company, David’s Agrigold Farms, LLC, cleared land in the area to plant an orchard.

Spokeswoman Caroline Oppleman, with the Arizona Department of Environmental Quality (ADEQ), in Phoenix, said Monday that “as of right now,” property owner David Turner is “in compliance with the consent order we agreed upon last week.”

A DEQ had contracted with Scottsdale-based “Soilworks®” to spray chemical stabilizer on the 320 acres of Turner’s land nearest the Interstate.

According to the company’s website, Soilworks applied nearly 45,000 gallons of its “Gorilla Snot,” described as an “eco-safe, biodegradable, liquid copolymer used to provide erosion control and dust  suppression.”

“The work that ADEQ had set out to do was completed Saturday,” she told the Range News. “The ‘Gorilla Snot’ appears to be doing its job.”

On Sunday, May 22, Turner initiated his own soil stabilization treatment, using a similar product called “Sitelock,” applied by a different company – National Land Management, in Phoenix, she said.

Turner has agreed to treat an additional 320 acres of his land, which “could be completed as early as tomorrow (Tuesday),” Oppleman said.

She explained that Turner has “just north of 1,200 acres” in the area, and that 600 acres already has trees planted on it.

“ADEQ has inspectors on site and we are working with the property owner to ensure that cover crops will be planted,” Oppleman said.

In a statement issued Tuesday, May 17, Oppleman deemed “unacceptable” the dust issues caused by activities at Turner’s farm, located near milepost 376 on I-10.

“Since the ADEQ became aware of this issue, we have worked proactively and diligently with the farmer, the Arizona Department of Transportation (ADOT), Arizona DPS, and the Arizona Department of Agriculture (ADA) to take actions to solve this problem caused by this new owner to the area, who, being from out-of- state, was unfamiliar with the nature of Arizona soils,” she said.

“During our work together, it appeared as if Mr. Turner understood the urgency and need for quick and thorough action. Therefore, in collaboration with ADOT and the Dept. of Ag, we deployed State resources to mitigate the dust issue and arranged for stepped up watering of the farm,” Oppleman said.

“Simultaneously, we worked on a consent order with Mr. Turner to remedy the situation, which we finalized yesterday (Monday, May 16) and went into effect immediately.”

Key components of the consent order include:

“Therefore, we are redeploying State resources to mitigate the dust issue and will be pursuing escalated enforcement including penalties of up to $10,000 per day,” Oppleman said last Tuesday.

The Range News asked DPS if it would seek reimbursement from Turner for its vehicle totaled during the April 25 crash, as well as the use of manpower in closing and opening the affected 62-mile stretch of the Interstate.

Lee replied Wednesday, “DPS is not seeking reimbursement from the land owner. ADEQ and the Attorney General will be the ones seeking any reimbursement.”

“We are solely focused on the Public Safety aspect of the dust issue,” he said.

“If you disturb the soil, it is more prone to dust,” he told the Range News. “Even more so when you disturb virgin desert land.”

As an emergency stopgap measure while ADEQ worked with Turner to develop a plan for mitigating dust from his field south of I-10, ADOT provided water tankers last week to haul water and contracted for water trucks to apply an initial watering to several hundred acres, said ADOT Spokesman Doug Nintzel.

That initial response to the situation ended Sunday, May 15, with Turner and ADEQ agreeing on a plan for the owner to take over dust mitigation, he told the Range News.

Meanwhile, ADOT continues to have personnel stationed near the field along I-10 to coordinate with DPS on immediately closing the Interstate and establishing the detour when conditions warrant, Nintzel said.

Turner owns about 2,400 acres of land in the San Simon Sub-Basin, according to his July 17, 2015 letter to the Arizona Department of Water Resources (ADWR).

At that time, he was writing in opposition to a proposed Irrigation Non-Expansion Area (INA) in the water basin.

Earlier that year, ADWR had received a petition from some of the basin’s growers, who sought designation of the area as an INA.

In his opposition letter, Turner said that “beginning last fall and up through the present,” he was engaged in an effort “to bring the land into cultivation, including drilling wells, purchasing trees, and developing an irrigation plan.”

She said that, hypothetically, if Turner was not irrigating at the time, and “did not irrigate five years prior to the determination, under State law, he would have the opportunity to prove that he had made a ‘substantial capital investment’ with intent to irrigate.”

As of press time, there was no response to three e-mails sent to a law firm copied on Turner’s letter to ADWR.

A phone message left last week for Nicki Frank, with David Turner International, has not yet been returned. Frank had sent the July 17, 2015 e-mail to ADWR on Turner’s behalf.

The 62-mile stretch of I-10 was closed again the afternoon of Tuesday, May 17.

On April 25, a dust storm resulted in multiple crashes at milepost 376, including the involvement of a couple of first responders. A DPS patrol vehicle and a San Simon Fire District rescue truck were totally demolished by semi-trucks unable to see and traveling too fast through the area. No one was seriously injured in the crashes.

The detour route was about 40 minutes extra travel time. 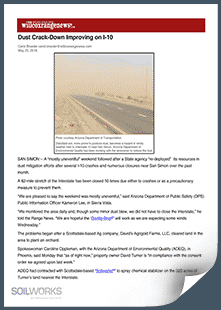