SAN SIMON, AZ (CBS5) – The images of thick, brown dust all but blocking Interstate 10 captured the attention of motorists, state regulators, and the media.

At least seven times over the course of two months, the Arizona Department of Transportation was forced to shut down one of the busiest east-west transportation routes in the country, all because of a farmer whose fields were creating a mini-dust bowl.

The state finally stepped in, fined the landowner and used a chemical spray to hold down the topsoil. Case closed. But not quite.

A CBS 5 investigation into the circumstances that created this “dust battle” shows it could happen again and again. It is the result of an unregulated supply of groundwater, desert land for sale, and investors who are ignorant of the intricacies of growing orchards in dusty, windblown southeastern Arizona.

“Pecans do real well at the elevation we’re at,” said Brian Driscoll, who is the farm manager for Farmers Investment Company’s (FICO) pecan orchard in the small community of San Simon.

Driscoll describes the lengths to which FICO has gone in order to turn San Simon’s dusty dirt into a profitable orchard. Steps include a high-tech underground irrigation pipe system that waters individual trees, as well as a cover crop planted in between the rows of trees that’s meant to reduce the blowing dust.

“If you just leave the ground slicked off dirt, you’re going to have your own trees just beat up by the wind,” said Driscoll.

It is FICO’s success at farming pecans across southern Arizona that helped to pique the interest of out-of-town and out-of-state investor farmers, who are now descending on San Simon.

An abundance of cheap land, coupled with few regulations on groundwater pumping, has lured California farmers who have dealt with increasing pressure to reduce water use in their own orchards.

“It’s really been primarily in the past year that the interest has really picked up over there,” said Sam Lindsey, a real estate agent who spent decades with the Department of Agriculture.

Lindsey says there are some basic truths about farming the San Simon Valley.

Image. Locals say you can spot the new farms by looking for the dust devils. (Source: KPHO/KTVK)

“Those that have been around the industry know that you don’t leave bare ground,” said Lindsey.

That appears to be the problem that led to the I-10 freeway shutdowns. An investor farmer from the Phoenix area cleared the land during a time of year when the winds are known to blow.

But other investor farmers in the area also appear to be ignoring the best practices used at farms like FICO’s. Field after field of pecans and pistachios are growing in what appears to be dry sand, with no cover crop. Standing near one

of these on a recent Tuesday was a lesson in how dust devils and dust clouds form and blow away. Locals say you can spot the new farms by looking for the dust devils.

Farmers like Brian Driscoll worry more about the water than the dust.

“The amount going out, the overdraft we call it, is exceeding the recharge,” said Driscoll. He and other established farmers worry that the new influx of investors are going to literally suck the valley dry. They tried to create an Irrigation Non-Expansion Area last year, but the Arizona Department of Water Resources ruled that there was no evidence the current level of farming was causing a problem. It’s a conclusion Driscoll and others disagree with.

“It was clearly the wrong information,” said Driscoll, when describing how deep the aquifer really is. “It becomes economically unfeasible to keep farming once it gets to a certain point,” he said. 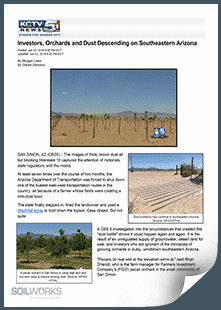