Arizona taxpayers have spent nearly $600,000 to stabilize dust blowing off the land of a wealthy farmer whose decision to blade 640 acres near San Simon led to car crashes and forced officials to detour cars off Interstate 10 near his property.

The Arizona Department of Environmental Quality has yet to fine or cite landowner David Turner for creating unsafe conditions or to bill him fully for what it spent to correct them — and it may not have the authority to do so.

The statutes governing violations of air quality are fairly toothless, especially when it comes to agriculture.

Turner, a Scottsdale businessman-turned-evangelist who now lives in Atlanta, said he was working on stanching the dust when the state stepped in. He said he has already spent a lot of money stabilizing the soil and does not intend to reimburse the state for actions it initiated.

Turner made his first public comments in a telephone interview last week about the April and May dust storms that caused three multiple-vehicle accidents and forced eight closures of I-10.

Turner made his fortune with a Scottsdale-based business that packaged and sold nuts and dried fruits. The San Simon pistachio farm is his first farming venture, he said.

He blamed the blowing dust on a “perfect storm” of weather conditions and delays in irrigation installation.

“This is an El Niño year and very strong and unusual winds came out of the south. Usually they blow east to west,” he said.

Meteorologist Mike Leuthold of the University of Arizona said El Niño had no effect on spring winds inArizona, which blow out of the southwest in the afternoons “90 percent of the time.”

“They happen every year,” Leuthold said. “Southwest winds are by far the most common winds in Arizona in late spring and early summer.”

A San Simon rescue truck and a DPS patrol car were wrecked in a collision with a tractor-trailer in one dust storm.

Wind records for April show the afternoon winds blow from the southwest, perpendicular to the interstate at that point. This year, those southwesterly April winds blew dust from the land that Turner began clearing in late February.

Walls of dust quickly dropped visibility on the highway, leading to multiple-vehicle crashes on April 7, 25 and 29.

ADEQ received the first of its three complaints on April 26 and began looking for the owner. The agency contacted Turner’s farm manager, who said he was getting a water truck and arranging for long-term irrigation of the parcels.

Turner, whose business is called David’s Agrigold Farm, said he worked cooperatively with ADEQ at first.

He signed a consent agreement on May 16, in which he admitted no wrongdoing but promised to take immediate action to prevent dust from blowing in the future, including application of a chemical to stabilize the soil.

The consent agreement specified that the business would be billed for the first $90,000 needed to apply the chemical stabilizer. The Arizona Department of Environmental Quality agreed in the document to be billed for the remaining costs.

That application of a product called Gorilla-Snot® by Soilworks® covered the 320-acre parcel closest to the interstate.

This graphic, known as a windrose, shows the predominant wind pattern (1983-2010) for April in the vicinity of David Turner’s farm. Wind blow predominantly from the southwest, which, at that point on Interstate-10, is perpendicular to the highway.

The Arizona Department of Transportation brought in additional tanker trucks to water the site. It spent nearly $308,000 in direct costs related to mitigating dust at the San Simon farm, ADOT spokesman Tom Herrmann said in an email. That includes $112,000 to contractors, plus personnel costs and related expenses.

That total does not include the cost of closing I-10 and establishing the detour, Herrmann wrote. ADOT has not sought reimbursement, but will coordinate with ADEQ on the subject, he wrote.

The Arizona Department of Public Safety spent about $31,000 on personnel, vehicle use and overtime pay during the dust events, said DPS spokesman Trooper Kameron Lee.

A day after signing the consent agreement with Turner on May 16, an ADEQ spokeswoman said in an email that Turner had been “slow to comply with the terms of the consent order. Therefore, we are redeploying state resources to mitigate the dust issue and will be pursuing escalated enforcement including penalties of up to $10,000/day.”

On Thursday, an Arizona Department of Environmental Quality official said no decision has been made on whether to pursue penalties.

“Right now the only enforcement document we have in place is the consent order. It doesn’t get into reimbursement or penalties,” said Timothy Franquist, director of the department’s Air Quality Division.

Franquist called the Turner property “an extreme example” of dust blowing from agricultural land that led to the rare action by his agency. Neither the state nor the counties that have their own environmental quality departments have the authority to regulate agricultural practices.

Farmers are required under state statute, however, to take “reasonable precautions to prevent excessive amounts of particulate matter from becoming airborne.”

A check of the Air Quality Division’s records, requested by the Arizona Daily Star, turned up 129 complaints about blowing dust that reduced visibility for highway traffic since 2000. Only seven were from agricultural sources and none of the complaints resulted in enforcement action.

Franquist, with the Air Quality Division since 2006, said he did not recall his agency enforcing the agricultural statute before the Turner situation, which generated a great deal of interest from a variety of state agencies, especially after a Department of Public Safety cruiser was one of nine vehicles involved in the third dustcaused crash on April 29.

“It’s fair to say that the cruiser smashed among the nine vehicles was of interest, one, from a public safety standpoint and also inhibiting commerce and tourism,” Franquist said.

After that third crash, the departments of Public Safety and Transportation lowered the speed limit in the vicinity of Turner’s farm to 45 mph and began precautionary closures of I-10 on windy afternoons. Officials researched ownership of the property and met with the farm managers.

“It was of serious interest to everyone in the state,” Franquist said.

Turner, who was traveling in Europe as part of his faith-healing ministry, said he first became aware of the problem around that time.

He said his farm managers worked with ADEQ to halt operations when the wind was blowing and to water the site to keep down dust, strategies recommended by the department’s inspectors after their first visit to the site on May 4.

Records supplied by the department at the request of the Star show that inspectors discovered little progress on halting the dust on May 17, the day after the consent agreement was signed.

That morning, three 4,000-gallon water trucks were operating and were creating dust as they struggled to move through “deep soil within the parcel,” the inspection report shows.

“Farm staff reported 4,000-gallon water trucks continue to sink in soil and are unable to travel across entire parcel.

“One water truck remained stuck in deep soil and broken down,” the inspection report said.

By 2 p.m., with winds gusting to 27 mph, the inspectors observed “a large amount of dust” coming from the parcel.

I-10 was closed down that afternoon and traffic routed on a 110-mile detour on U.S. highways through Safford.

That afternoon, a contractor hired by the state arrived with larger 8,000-gallon water tankers.

The following morning, Hunter Contracting began applying the Gorilla-Snot soil stabilizer to the parcel. That work continued until Friday, May 20, treating about 320 acres of denuded land.

Subsequent inspections by ADEQ found that the treatments held during blowing winds and that no closures of the interstate have occurred since a brief “rolling-closure” on May 25 when dust originated from work being done to plant trees on an irrigated site that was not treated with the chemical stabilizers.

“It was actually very miraculous because nobody believed there was any water. I have a ministry, and God told me to buy this land,” he said.

He said one 640-acre plot has been successfully planted with pistachio trees. Phase 2, the second 640 acres, was cleared in late January and early February. He was beginning to plant trees when the winds started blowing.

He said he stopped farming activities and started addressing the dust problem “when it became an issue with the accidents between April 7 and April 29.”

“We are very, not only business-minded people, but we believe in doing the right thing,” he said.

When water trucks did not work, he said the Arizona Department of Environmental Quality recommended a temporary sprinkler system, then switched to the soil-stabilization tactic when it learned it would take six weeks to install the irrigation.

“A lot of pressure came down from the state and the Governor’s Office to get it done quickly,” Turner said.

When asked if he took responsibility for the series of accidents on I-10, Turner said: “That part I can’t comment on. We’re farming. We’re doing the best we can. We’ve taken every precaution.

“We’ve spent as much as the value of our land” on mitigation, Turner said.

Turner recently moved to Georgia, where David Turner International Ministries is now headquartered. He said God directed him to purchase a mansion there, in the suburb of Buckhead, that was formerly owned by actor and director Tyler Perry.

“The bottom line is I’d never heard of Buckhead, Georgia. God put it in my heart. I see this house and it’s like God spoke to me. He gave me the price I would pay.”

The mansion, patterned on the palace at Versailles, was listed at$25 million. Turner bought it for $17.5 million. 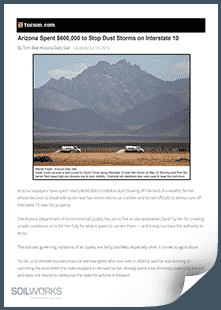