At 4:43 p.m., the National Weather Service reported that visibility was less than a half mile southeast of Arizona City and a blowing dust advisory was in effect until 7 p.m. Monday night for the region.

The freeway was closed in both directions near Picacho Peak at about 4:45 p.m. but reopened about 20 minutes later, the Department of Public Safety said.

Arizona Department of Transportation officials didn’t immediately say Monday afternoon if there were any serious injuries in the crashes. Authorities said four vehicles were involved in one crash and three vehicles in the other.

The area around Picacho Peak is considered a dangerous corridor for dust storms.

According to the Arizona Department of Transportation, the region on I-10 between mileposts 211 and 220 experienced 37 of the state’s 302 dust-related crashes from 2000 to 2010.

A Phoenix meteorologist has been studying dust patterns in Pinal County since 2014 by installing censors along I-10 near Eloy and Casa Grande. The project’s goal is to develop a sophisticated warning system that can alert motorists of an incoming dust storm.

Arizona has spent nearly $600,000 of taxpayer money to stabilize dust blowing off the land of a wealthy farmer and causing problems on I-10 near the New Mexico border.

The Arizona Daily Star reported that the Arizona Department of Environmental Quality hasn’t fined or cited landowner David Turner for creating the unsafe conditions by blading 640 acres near San Simon. The department may not have the authority to do so because statutes governing air quality violations can be toothless.

The blowing dust led to car crashes and forced officials to detour cars off I-10 near Turner’s property.

Turner is a Scottsdale businessman who now lives in Atlanta. He told the Daily Star he was already working on suppressing the dust when the state stepped in and doesn’t intend to reimburse the state.

The Arizona Department of Environmental Quality and the state added a chemical stabilizer to half of the farm late last month after watering it to keep dust at bay was unsuccessful.

A Tucson state senator has proposed building barriers along I-10 near Picacho Peak to help mitigate blowing dust. Steve Farley, D-Tucson, says the barriers would be landscaped so not to produce dust.

In 1977, the U.S. Department of Agriculture used bulldozers to pile together several berms near the freeway to act as barriers for future dust storms. The berms were topped with native vegetation that required little watering.

Farley said the strategy seemed to work in that area as the number of reported accidents dropped in the following years. He thinks the same could be done about 10 miles north near milepost 214.

Building a barrier could be a simple solution that requires limited maintenance or upkeep, Farley said, as the vegetation planted in 1977 depended on natural water runoff from the freeway.

Motorists are advised to take precautions. ADOT urges drivers to “pull aside, stay alive” when dust moves in. The following are driving tips when encountering a low-visibility dust storm:

— Avoid driving into or through a dust storm.

— Do not wait until poor visibility makes it difficult to safely pull off the roadway — do it as soon as possible. Completely exit the highway if you can.

— If you encounter a dust storm, check traffic immediately around your vehicle (front, back and to the side) and begin slowing down.

— Do not stop in a travel lane or in the emergency lane; look for a safe place to pull completely off the paved portion of the roadway.

— Stop the vehicle in a position ensuring it is a safe distance from the main roadway and away from where other vehicles may travel.

— Turn off all vehicle lights, including your emergency flashers.

— Set your emergency brake and take your foot off the brake.

— Stay in the vehicle with your seat belts buckled and wait for the storm to pass.

— Drivers of high-profile vehicles should be especially aware of changing weather conditions and travel at reduced speeds. 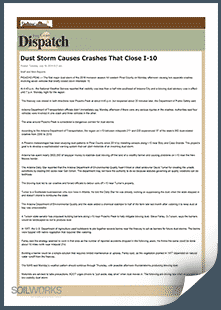