Minutes: After discussion on procedures, Robert moved the minutes of August 3, 2015 and November 4, 2015 be approved, seconded by Roger. The motion passed unanimously.

Judy stated the minutes of the February 3, 2016 meeting had not been completed by the

PLAC’s May 4th meeting. She asked if everyone had received both sets of minutes via e-mail and had an opportunity to read them. Discussion followed.

Following more discussion, Roger moved the minutes of the May 4th meeting be approved with the sentence about roads receiving federal monies removed, seconded by Butch. The motion passed unanimously.

Judy explained, at the last Hidalgo County Commission meeting, the Commissioners discussed the three PLAC vacancies and elections of officers. The PLAC should receive some instructions after the next Commission meeting. Discussion followed.

Butch moved the election of officers be postponed until the Commission provides some direction to the PLAC, seconded by Robert. The motion passed unanimously.

BLM Las Cruces District – Judy stated she attended a coordination meeting in Las Cruces between the BLM and a coalition of soil and water districts regarding land-use planning in the Organ Mt. National Monument. Don and Bill Childress were at the meeting. She also had an opportunity to get re-acquainted with the New Mexico State Director, Amy Lueders.

Don announced Phil Smith had recently retired, after 34 years as the BLM’s Range Management Specialist. His position will be filled as soon as possible.

Don also discussed BLM’s coordination with DOT on I-10 dust issues. DOT recently selected two contractors to consider specific sites and methods to reduce dust. As they progress with a proposal, Don hopes to bring one of the contractors to a PLAC meeting to discuss their process.

Tomorrow, August 4th, there will be a meeting with Centennial West Clean Line in Las Cruces. Clean Line plans to build a 900-mile transmission line from NE New Mexico through Arizona into California. Presumably, the route will be north of Las Cruces but he will know more after the meeting.

Discussion followed. Several members of the PLAC expressed their disappointment with the retirement of Phil Smith. Roger asked if BLM had heard anything more about the private landowner in Arizona that caused the dust problems in that area. Don responded he hadn’t heard any more. In response to other questions, Don explained DOT had not received any funding for public outreach efforts. He had hoped an outreach campaign might help educate drivers of possible conditions and what to do.  Meira and Doug explained the Arizona State Land Department had treated the area with “Gorilla-snot®” to prevent additional dust problems. Butch stated the owner had moved to Florida so the state stepped in to resolve the problem.

In response to a question, Don stated the BLM had received the comments on the new 2.0 Rule but to his knowledge nothing has been acted upon. Darr stated an outstanding set of comments were developed by the county coalition she participated in. Discussion followed on the benefits of the planning rule change. Don explained, as he understood, the new change would allow more public input into the process before a document is developed. Darr stated she understands the direct opposite to be true.

Don also explained the BLM plans to meet with the joint counsel of water districts to hear how they would prefer to be engaged in the Organ Mountain’s Desert Peak plan. The BLM does not plan to go off on their own when developing alternatives. They are meeting with the water districts, as well as other groups and individuals, before the formal scoping document is developed. In response to a question about coordination, Don stated the counties still have an opportunity to become Cooperating Agencies. He does not understand the controversy between coordination and cooperating agencies.

Coronado National Forest – Doug stated the Douglas District had only 15 fires this year.

Most of them relatively small.

The District will be meeting next week to go through the comments on the Travel Management Plan. They will be incorporated into the Draft Final EA some time before the end of the year. The old planning rules will still apply during the current TMP process. After publishing the Draft Final EA, there will be another opportunity to submit comments.

So far the only significant comment they need to act upon is from Cochise County. The county believes they were not adequately involved. He will be meeting next week with the Commission to discuss their concerns. Hidalgo County’s concern about where the notices are published has been addressed. Doug met with his supervisors, explained the situation with the Douglas District being in both states so all future notifications will be published in the Lordsburg newspaper.

In response to a question regarding the planning process, Doug explained the Forest Service had changed the way they handled pre-decision notices in hopes of avoiding legal challenges. He assured the PLAC that a decision can still be appealed. By changing the process, the FS hopes to demonstrate, in a court of law if necessary, the Districts worked in good faith with the communities.

A question was asked about the fires and how many were man-made. Doug responded that at least 3 fires were confirmed, with evidence, to have been started by individual(s). In response to another question, he stated that after the Travel Management Plan is completed, they will consider adding a spur to the current road system. However, it is difficult to allocate specialists for road projects since roads are a low priority item for the FS, a definite access need into an area must be demonstrated and a NEPA review must be followed.

NM Game and Fish – Judy explained both Derek and Brandon were counting Ibex in the Florida Mountains and unable to join the PLAC.

Border Patrol – Adam stated the BP has three new MSC that replace the MSSs. He explained the MSCs are more accurate in their radar and GPS readings. In response to question about the status of the road easements on state lands in the Bootheel, Adam responded he would ask Agent Gardea. He added the BP has recently added several new agents.  Their quota is still not filled.

PLAC’s history, purpose &amp; value – Judy explained she had not been involved with the PLAC when it was initially set up. She handed out several copies of a “PLAC History” explaining after she was elected Secretary in January of 1999, she began assembling the Ordinance, Customs and Culture Statement, minutes of previous meetings and put current minutes in a binder for future reference.

She also explained the BLM began updating its Mimbres Resource Management Plan (RMP) in 1988. They contracted with the Nature Conservancy to do a Biological Inventory of the area. In June of 1989 the BLM published its Scoping Report. A series of meetings were held throughout the planning area to solicit input from the public.

Most individuals were not familiar with a NEPA analysis or any of the terms used in the RMP. The meetings became very contentious and divisive as a result. Several individuals, especially those involved in the ranching industry, were concerned with the economic viability of their businesses. They contacted their elected officials and universities seeking help to address their growing concerns.

In August of 1991 the Draft Environmental Impact Statement was published. The BLM proposed four (4) alternatives. These alternatives did not necessarily reflect the public’s comments and concerns. In addition, the economic impacts to the counties appeared to be diminished with the inclusion of Las Cruces and El Paso into this analysis.

In October of 1992 the Final EIS was published. Discussion followed on how contentious and hostile the process had become by this time; how important it was to have an Allotment Management Plan and why ranchers with an AMP had less concerns with the planning process than other ranchers.

The Record of Decision was finally published in April of 1993.

In 1992 BLM began its range management reform at a national level. By this time many counties recognized how important it was to become involved at the earliest opportunity. Several counties passed land-use planning ordinances during this process. Hidalgo County adopted Ordinance No 94-1, October 11, 1994. Judy handed out copies of the Ordinance for the PLAC’s review, explaining Dr. Thal was very instrumental in writing the document.

Judy stated the longer she had served on the PLAC the more she’s realized how important it was to be involved in land use planning, both as an individual and a community. Butch added he felt it was very important to have a forum whereby individuals could come together to discuss land-use planning proposals that might affect their livelihoods. The purpose of this forum should be to represent community concerns and act in an advisory capacity. Discussion continued as to whether there was still a need for such a forum.

Doug responded that from a Forest Service perspective, the agency values an entity where they can engage the public in the land-use planning efforts. Otherwise, the agency tends to fall out of touch with the larger community.

Judy pointed out the purpose of the ordinance is found on page 3, Section 1 (a): “The Purpose of the Hidalgo County Planning, Consultation and Review Ordinance is to provide a problem- solving process to eliminate or significantly reduce conflicts or negative impacts on the human environment within Hidalgo County due to state or federal land-use actions”.  Discussion followed as to why it was beneficial for agencies and counties to effectively communicate.

Darr stated she thought the ordinance was important but it is a little outdated. She doesn’t think it needs to be changed but the County Commissioners need the PLAC to tell them what happens at their meetings. She went on to say the PLAC just finished approving the minutes for almost a year’s worth of meetings the Commissioners knew nothing about.

A discussion on the purpose and mission of the PLAC ensued. Commissioners Shannon and Stewart claimed a lack of communication existed between the PLAC and the Commissioners. They stressed the need to communicate and keep the Commission informed of any motions passed by the PLAC. This should be done immediately following a meeting so the motions can be put on the Commission’s agenda, if needed.

The Commissioners also stated the Ordinance creating the PLAC, 20 years ago, and the PLAC’s Bylaws should be revised. This would improve communication between the PLAC and the Commission. The Commission also wants the minutes from the PLAC meetings submitted in a timely fashion and recorded with the County Clerk’s office to render them legal. The role and responsibility of the PLAC’s Secretary in this regard was also discussed.

Butch moved the County Commissioners review the bylaws, the articles and develop a draft set of communication procedures for us (the PLAC) to follow to establish the kind of needs the Commissioners need for their (the PLAC’s) advisory capacity, seconded by Robert. The motion passed unanimously. 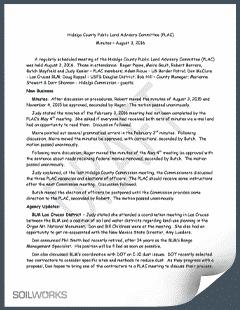