NATURAL COVERS: IS IT A VIABLE SOLUTION TO MANAGE BIOSOLIDS TEMPORARY STOCKPILES?

Agriculture recycling of Biosolids is recognised as the Best Practicable Environmental Option for sludge management in most situations. However, field stockpile management over the rainy winter months is challenging since most digested Biosolids are vulnerable to wet weather. Such stockpiles may cause risks to the environment and impose an extra cost to sludge producer in addition to the reputational damage. The aim of this study was to investigate the possibility of using natural covers to manage the stability of Biosolids stockpiles. Preliminary field trials were conducted using straw and live-grass covers. Initial finding reveals that the Biosolids stockpiles with live-grass cover tend to retain the stability during severe winter periods. This study suggests that natural covers could be a practical, efficient and economical technique for Biosolids stockpile management. However, further studies are recommended to identify suitable grass varieties for live covers, other potential natural cover materials and possible post-spreading issues.

The UK produces approximately 1.4 million tonnes (Dry Solids) of sewage sludge per annum with volumes increasing annually. Currently 80% of the total production goes to agricultural recycling after suitable treatment while rest is mainly disposed through incineration and landfill (OFWAT 2015). Treated sewage sludge (Biosolids) which contain plant nutrients and organic matter has been recycled to agricultural land around the world for many decades.

EU/UK regulations allows Biosolids to be stockpiled on the same field location up to 12 months, in practice, it is kept to a minimum. However, Biosolids stockpile management over the rainy winter months is always challenging. The stockpile stability is broadly determined by;

Having a Biosolids product “fit for the purpose”

Observations suggest that Biosolids stockpiled in windrows stand better in wet weather than bulk stockpiles although windrowing is not always practical as it requires a comparatively larger footprint and greater field access. Profiling the stockpiles into distinct cone or pyramid shapes could encourage rain water that drop on the stockpile to be run-off over the surface of the stockpile. Relatively smaller stockpiles (around 300 tonnes) retain their internal structure better hence tend to stand longer in wet weather compared to bigger stockpiles.

Once placed, stockpiles could receive water from multiple sources (figure 2) which could reduce the overall dry solids contents of Biosolids. Not all water received by the stockpile get absorbed by the Biosolids, some water could flow over the stockpile surface, and some could leach out while some water get evaporated. Over the course of the stockpiling duration, this cycle continues. However, the net rate of water take up by the stockpile determines whether it is going to collapse or withstand the weather conditions.

Rain water that gets absorbed by the surface layer of the stockpile tends to deteriorate and run over the relatively dry sub-surface, very much like a “Lava Flow”. This process opens up more and more area of the stockpile to receive rain water which make the stockpile displacement faster until whole structure collapses.

Evidence of climate change affecting weather system is prominent; prolonged and extreme weather (e.g. high rain fall, flooding etc.) events are common. Since, future circumstances are uncertain, the UK government is seeking the support from businesses for risk management and resilience planning (Defra, 2013). For Biosolids undertakers, process improvements and new techniques into Biosolids product and stockpile resilience to withstand the changing weather system are now more important than ever before.

Currently various techniques and materials are used to protect and contain temporary Biosolids stockpiles. Bunds made out of straw bales or compost/farm yard manure are widely used materials while reusable stockpile covers are also emerging in the market. Each individual technique has its own advantages and disadvantages.

Simple polythene covers (silage sheets) to different types of durable and flexible sheets (Evans 2006; 2014) are emerging in the markets. These impermeable covers are ideal to maintain sludge quality

intact while avoiding potential environmental impacts. However, placing such impermeable covers over the stockpile and anchoring could be challenging and may require weights (sand bags, water etc.), machinery and labour. Durable plastic covers could be relatively expensive. However, if handled with care, they could be re-used multiple times. Usually these covers get contaminated with Biosolids once covered and may require cleaning before reuse. Disposal of such contaminated covers could also be expensive.

In this technique, liquid copolymer which is widely used for erosion control and dust suppression is sprayed over the stockpiles to form a light surface crust. According to the manufacturer, increased applications of Gorilla-Snot can be more effective since it does not wash away in the rain and does not re-emulsify with water. The product is designed to penetrate into the ground creating a strong and flexible surface that can withstand the intense environmental conditions (SOILWORKS, 2016). The manufacturer claims that this technique is eco-safe and biodegradable. However, it needs curing once spread and further investigation is required to establish applicability and cost of how it would work on Biosolids. Some trials with Gorilla-Snot are ongoing in the UK conditions with feedback expected in the next few months.

Constructing a wall with large straw bales helps to contain sloppy stockpiles to minimise potential pollution risks (see figure 3). Straw bunds do not avoid further product deterioration since it does not prevent receiving of rain water fall onto the stockpile. However, straw bund wall can filter-out some excess water. Generally, it needs around 20 bales for 300 – 400 tonnes which can cost £3.50 – £4.90 per tonne depending on stockpile size, product quality, location, receptor risks etc. Disposal of the contaminated bales could be an issue. Furthermore, the Biosolids undertaker have to be extremely precautious when sourcing straw bales because these should be free from seeds of arable weeds such as herbicide-resistant blackgrass (Evans 2006). This technique is expensive in labour and materials and mostly used as the last resort.

Inspired by nature (Figure 4), establishing a live vegetation over Biosolids stockpiles using grass (e.g. Rye-grass) or selected crop varieties (e.g. Winter Wheat) could help to retain the stability of the stockpile. Cover vegetation can not only could reduce rain water getting into the stockpiles but also could get rid of some water in the form of evapotranspiration. Furthermore, the root system can help to form a surface crust over the stockpiles giving some structure.

The aim of this study was to investigate the possibility of using live grass covers to maintain the stability of Biosolids stockpiles. The preliminary trial started with Digested Biosolids (25% dry solid). Initial stockpile was delivered in October 2013 and contained 110 tonnes heaped in windrow. In Feb 2014, part of the stockpile was sown with grass seeds (Rye-grass – Lolium multiflorum) while keeping rest of the stockpile with no cover. At the time of the sowing, the weather remained cold and wet but the stockpile seems to be stable. In this trial, grass seed was hand sown.

Two week following the sowing, despite to the cold weather, grass started to appear and it took four weeks to grow into a substantial cover. The residual biological activities taken place in stockpile tend to raise the temperature which helps to germinate the grass seeds even in colder weather. Subsequently, due to the extremely wet weather, part of the stockpile collapsed (Figure 5) in April 2014 while the part with the “Live Cover” remained stable.

Figure 5:          Part of the Biosolids stockpile without the “Live Cover” collapsed

“Live Cover” could help the stockpile stability in many ways. The overgrowth would act as a cover in reducing the rain water getting into the stockpile and the evapotranspiration (evaporation from the surface of the pile and transpiration from the grass cover) would remove rain water that has penetrated the stockpile, from deep inside reached by its root system. Further, the root system tends to hold the surface layer of the stockpile (Figure 6) forming a “crust” which gives some physical stability while suppressing the odour. “Live Cover” would improve the appearance of a stockpile (better aesthetics) and could help to trap nutrients, especially readily available Nitrogen, reducing potential nutrient losses. Hence, it could be an effective technique for wet summer stockpile management. The cost associated with this techniques is low and estimated to be £0.35 – £0.45 per tonne based on the preliminary trials.

Straw tends to provide a stiffening effect for wet sloppy sludge (Figure 8) which can slowdown the “Lava Flow” and also improves the spreadability of such deteriorated Biosolids products.

The permeability of the straw cover means that it would let some rain water getting into the Biosolids. Subsequently, surface straw cover can hinder the water evaporation from the Biosolids under the cover. As stated before, Biosolids undertakers have to be extremely precautious when sourcing straw for covers in the sense of weeds such as herbicide-resistant blackgrass.

The aim of this study was to understand the logistics of establishing straw covers and impact of straw covers on Biosolids stockpiles. In 2016, two digested dewatered (25% dry solids) Biosolids stockpiles (approx. 300 tonnes each) were placed side by side on fairly flat field. One of the stockpiles were covered with straw about 30cm thick (Figure 9) using straw blower while the other stockpile left with no cover as the control. Dry solids content of the stockpiles, both on the surface and sub-surface (25 cm from top) was measured weekly.

Straw covers provides certainly better aesthetics compared to bare stockpiles and suppress odour. The preliminary trial suggest that the cost associated with this technique is £0.50 – £1.00 per tonne based on size of the stockpile.

Sludge analysis has shown that the percentage dry solids on the surface of the stockpile with no cover tends to fluctuate considerably while on the sub-surface tends to stay fairly constant. On the surface of the straw covered stockpile, fluctuations of the dry solids content was comparatively low although it indicated a rise during the first month. However, on the second month, dry solids content of the straw covered surface remained static whilst the bare stockpile gain more dry solids due to the evaporation (Figure 10).

Preliminary results do not indicate a distinct positive impact of straw covers in maintaining the dry solids content although it does not show any noticeable negative impacts. However, at the end of the trials, stockpile with no cover shows some signs of surface collapse and sloppy areas (Figure 11), although the rainfall was not heavy and long enough to collapse any of the stockpiles. No differences were experienced on product spreadability.

Grass/crop varieties that germinate rapidly even in cold wet weather and produce deep root systems need to be identified. It is also necessary to establish some full scale trials to identify the effectiveness of live covers on different stockpiles sizes. Further, different seed sowing methods should be tested to establish the most cost-effective and practical method. Optimum seed sowing rates need to be identified to establish even cover on stockpiles with different tonnages. Impact on spreading and potential post- spreading issues of “Live Cover” should be investigated. Further, “Live Covers” could potentially become a “weed” for growing crops following the spreading, hence it is essential to identify this impact on arable grounds and potential solutions (e.g. select annual varieties for live cover, spray-off the live cover prior to spreading etc.).

Authors would like to thank farm owners and the contractor (CJ and JM Huyton) who provided the practical assistant for this work. Also, the technical support provided by the Biosolids Recycling team at United Utilities is greatly acknowledged. 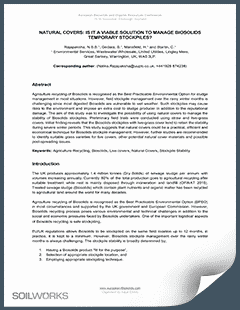