Demolition at toxic West Valley is on track, but moving slowly – by design

The building where the most highly radioactive materials at the West Valley Demonstration Project (https://www.wv.doe.gov/) were once handled is being torn down.

The vitrification plant is where 600,000 gallons of liquid nuclear waste were turned into glass cylinders in the late 1990s and early 2000s. The cylinders were then packaged in fives and welded (http://www.chbwv.com/graphics/HLW- Overpack-Automated-Welding-System.pdf) into steel canisters before being stored under 21-inch thick concrete casks and relocated to another spot on site.

In mid-September, contractors started peeling away the outside of the steel and sheet metal exterior of the building and the roof. That work wrapped up in early November, said West Valley officials.

“The (contractor) is making great progress with the safe completion of the first phase of this facility’s demolition,” said Bryan Bower, project director for the U.S. Department of Energy. “This accomplishment allows our team to continue its work in the completion of site demolition activities.”

How contractors with the CH2M HILL West Valley (http:/ chbwv.com/index.htm) team successfully solidifiedhigh-level radioactive waste, contained them and relocated them to a massive concrete pad on the site about a half-mile away in a massive two-decade long project. (CHBWV)

West Valley was the nation’s only commercial nuclear reprocessing plant. The waste was created when the site was operated by Nuclear Fuel Services between 1966 and 1972.

Some of the most radiologically toxic elements at West Valley include cesium, strontium, thorium and plutonium. Thorium-232 is its longest lasting element. It has a half-life of more than 14 billion years.

Workers perform some pre-demolition procedures in the vitrification building. (CHBWV)

The demolition of the 10,700 square-foot heavily fortified concrete cell where workers once turned highly radioactive waste into glass is now underway.

The 50-foot-high concrete and rebar-reinforced cell – with walls and windows up to 4 feet thick – is being taken down using shears and an excavator with a pneumatic hammer.

Officials said the process is slow and deliberate for a reason. “The team is here to perform all work safely and compliantly,” said Joseph Pillittere, West Valley’s manager of communications.

Because it contains higher radiation levels than the outside shell of the building, an epoxy-like substance called Durasoil is sprayed onto the concrete as it is chiseled away to prevent any of the material from escaping.

The debris is carefully packaged into containers, which are shipped by rail to a certified landfill out west.

About 6,700 tons of low-level debris is expected from the demolition, officials said. Specially-shielded lead windows, which allowed workers to look into the cell when they used robotic instruments to package the highly radioactive waste, will need to be dismantled and disposed of separately, officials said.

When that’s completed, probably sometime in February, the final phase of the demolition will be to remove a crane’s maintenance room as well as a tunnel and a filter room.

West Valley officials said the demolition is scheduled to be completed this spring. The main plant also will be demolished. Crews are working to deactivate the utilities in the plant, along with completing asbestos abatement, before the building can be torn down. About 80 percent of that work is done, Pillittere said.

The main plant at the West Valley Demonstration Project is also slated for demolition.

The demolitions are part of the first phase of decommissioning the West Valley site.

Other tasks involved in this phase include:

After tearing down West Valley’s facilities, crews will remediate soil on the site.

The next phase, which includes making final decisions on the site’s future, is scheduled to start in 2020.

Although federal law requires the high-level radioactive waste to be moved to a federal repository like the one once proposed for Nevada’s Yucca Mountain, there isn’t a place for it yet.

Until one is found, the waste could be stranded indefinitely on the concrete pads off Rock Springs Road. 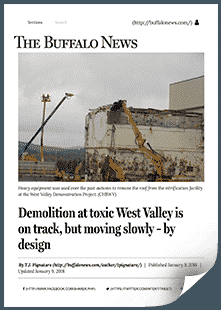