Stop #10 of the #USABMX national circuit dropped by the new and impressively improved Cobb County BMX for another edition of the always-awesome #Dixielandnats – complete with some Pro series action.

NUMBERS: This was the second year USA BMX has been to the new Cobb County BMX facility. And it is nothing short of awesome. Cobb County BMX is celebrating their 40th year of existence, and for the past 38 years of those 40, BMX mom Margie Hatfield has been the General, leading her troops and calling the shots. As word of the new and improved Cobb County BMX has spread like wildfire since last year, we knew this weekend would be bigger, badder and better than before – and when Saturday’s motos were posted, the record was set at 246 motos. A good sign of the times as the BMX national continues to grow!

WALK ABOUT: For many, this was their first time at the new City-built venue – including myself. We’ve all seen photos, but even those can’t do it justice until you’ve come to Powder Springs, GA and seen it for yourself. The grass-lined track was built where two baseball diamonds once stood. And the area where the old track stood for some 37 1/2 years is now a grassy park where the Factory pits were set up.

Encompassing the entire track is a pleasant sidewalk, with all of the bleachers raised up on berms of extra dirt. This makes for great spectating from no matter where you decide to sit. The track itself was recently slurried, overtop of with Soiltac, so it was bound to hold up well no matter what Mother Nature threw at us this weekend. Out of the first turn was a split straightaway decision-maker, which even saw some 5 &amp; under riders turn left and go for the big jumps (albeit, rolling thru them). The am-section went right and dog-legs a bit – forcing riders to ride the extreme white-line at the peak of the dog-leg, as they are really hitting their stride.

“I’d say our second straight away is the best part,” said local (and national) announcer Greg Harrison. “You can really open it up out of the first turn and the second straight really allows riders to get crankin’ into turn two.” On Sunday, they might’ve been crankin’ into the second turn a tad too much, as the sporadic rain and drizzle caused quite a few crashes during the mains. How many? Second turn official Dale told us he lost count after picking up 20 riders.

PRO SHOW: By most accounts, Kamren Larson should’ve owned this one. But Walker Finch has a better idea. Throughout practice, Larsen was looking like his usually-quick self. In the motos, he was The Man. Once the gate slammed down for the single-A pro final, as you’d expect, it was Larsen out front with about a 2-bike length lead at the Answer Holeshot stripe. But suddenly, Walker Finch hit his virtual nitrous-oxide button and began reeling in Kamren down the third straight and set him up for some swoopage in the last turn. The two of them exited side-by-side, as if they were in a fast-paced parade lap. Finch got him by about half a wheel at the line, bumping Larsen to the 2-spot, with Powers rookie pro Brady Kinchloe coming across for the third. Surprisingly, Walk revealed on social media that this was his first Pro win

With 17 riders – two more than Elite Men, the Elite Women class was so big that they had Semi’s for a change. “It was nice to have semis,” Alise told us afterwards. “Our class is growing! It’s a great thing for us.”

We’re not positive, but this could be the first time we’ve ever had more Elite ladies than men. No doubt, it’s a solid sign of the times, however you look at it.

In the final, Brooke Crain was hot on Willoughby’s tail, but couldn’t get that extra oomph needed to fly by Alise. When Mrs.Willoughby rides a perfect lap like she did both days at the Dixielands, it’s hard to find any room to make a move. The “Willobeast” was raised right, and doesn’t leave the door open – EVER. She’d go on to win two more, and Brooke once again – the bridesmaid, with two 2nd place scores.

The Elite Men ranks were bound to come down to two main guys – Joris or Corben.

Sharrah – the current World Champion, and Daudet the former 2-time UCI World Champ. With Joris coming off of double wins in Albuquerque and one win a weekend at all of the other previous Pro races, his streak is alive and well and the 500+ points lead in the Pro title chase shows where he’s at right now. Would Corben have anything for Joris this weekend? We’d soon find out!

AMATEUR HOUR: With that whopping 246 motos on Day 1, there were some good rider-counts to draw on for a big bump in National points. A win here just might play into the title-chase come November, and we had quite a few hotshoes out to score that W. 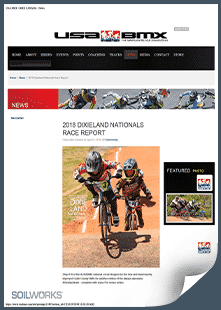