Soil health is an important part of agriculture and one of the most reliable indicators to evaluate soil health is soil macro-aggregate stability. Soil testing labs will soon be faced with the demand to process soil heath samples, but currently have no standard on which to base QA/QC protocols. Our goal was to create a standard, reproducible soil sample to evaluate inter-laboratory performance on aggregate stability testing.

The soils were treated with various amounts (1%, 3% and 5% by weight) of a soil stabilization polymer (Soiltac®, Soilworks, LLC, Scottsdale AZ). Pseudo-aggregates were formed by extrusion through a metal screen and oven dried. Eight replicate samples for each treatment were tested using the wet sieving method (see photo). This process was repeated on both soils twice.

There are differences in aggregate stability between the soils and treatment replications, with the Wellsville soil having greater variability than the Godfrey soil. The resulting values of aggregate stability, however, show little variability (Coefficients of Variability &lt; 10% over 8 subsamples within treatments, Figures 2 and 3). The systematic differences between batches in both soils, indicates that sample handling (i.e., differences in how the soils were mixed and how thoroughly the stabilizer was incorporated into the soil) have  a statistically significant impact on the outcome. We were also able to obtain a wide range of aggregate stability values with low standard error by mixing the various treated soils together at various ratios (Figure 3)

We will use different packing methods to ship standard pseudo-aggregates to participating labs for testing, to determine how the samples hold up during shipment.

We found that we were able to create a reproducible standard soil aggregate stability sample that will help evaluate inter-laboratory performance on macro-aggregate stability testing. These reference samples will be beneficial in light of the National Soil Health Initiative and planned national soil health inventory in that labs will have consistent reference samples upon which to base their internal QA/QC monitoring protocols. This will help ensure that soil health inventory results will be consistent nationwide.

Study was conducted with funding from a USU URCO Grant and lab assistance from the USU Department of Plants, Soils and Climate. In-kind contributions were courtesy of Soilworks, LLC, Scottsdale AZ. 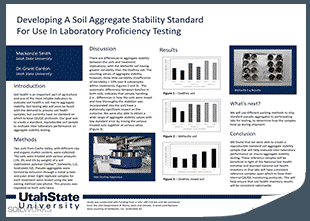